Writing on the wall: Delhi University in race against time for September 14 exams | Delhi News - Times of India

NEW DELHI: Two attendants of an online open-book examination nodal officer of a Delhi University college developed fever on Monday and were sent for Covid-19 tests on... 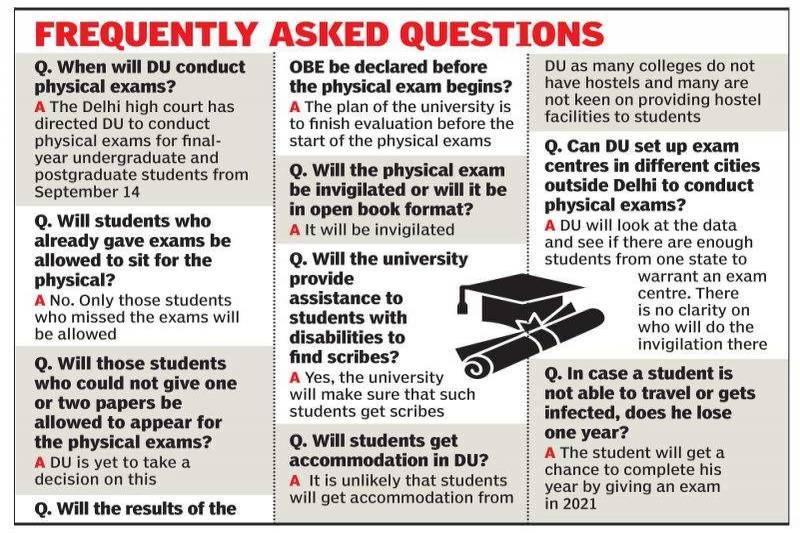 NEW DELHI: Two attendants of an online open-book examination nodal officer of a Delhi University college developed fever on Monday and were sent for Covid-19 tests on Tuesday. This has scared many DU staffers, adding to the anxieties over holding physical examinations from September 14 as ordered by Delhi high court. Can safety can be ensured when teachers and students meet in big numbers?
Beyond safety, outstation students are also asking about their food and lodging needs in Delhi, while Delhi residents worry about commuting when the Delhi Metro is not running. “In this situation, who will willingly come and work?” asked the nodal officer whose attendants are Covid suspects. He has himself gone into self-quarantine, and feels the physical exams will force the students to unnecessarily compromise their health.

Balram Pani, DU dean of colleges, acknowledges the problems. “Our officials, the legal cell and dean of examinations will go through the court’s directions and issue a notification soon,” said Pani. “We know many students are not keen on travelling in these circumstances and may not find accommodation in the city.”
Since a big portion of those sitting for the physical exams are students with disabilities, who couldn’t write the online OBE, the problems appear tougher. “For OBE, the university was unable to arrange scribes for us. Now how do they expect us to arrange scribes and travel to Delhi? And will hostels be open for us? Where else can we stay?” asked Suyansh Agarwal, a St Stephen’s College student from Chhattisgarh who vacated his hostel room when going home.
Manoj Khanna, principal, Ramjas College, was clear. “Providing hostels is not an option because the rooms are being prepared for the next semester,” he said. Another principal added, “Opening hostels will mean starting the mess facility and other services. This will require hostel staffs rejoining work, and raising the risk of infection.”
Pani’s only hope is a low number of examinees. But the data submitted to Delhi high court recently showed the opposite. “We are collecting information from colleges and hope to get a clearer idea of those who missed OBE. If there are less than 10% of total examinees, DU can set up exam centres in states with many aspirants,” said Pani.
Jaswinder Singh, principal, SGTB Khalsa College and head, DU Principals’ Association, said if exams were held, the most the colleges could do was to ensure social distancing and provide masks to students. Sanitising over 63 colleges and the various departments would be a mammoth task.
DU Executive Council member Rajesh Jha brought up another aspect and asked, “How can there be two modes of examination? When one set of the student is appearing for open-book tests, is the other set expected to write the exams under invigilation?”
There are also questions on whether teachers are expected to be on invigilation duty or evaluate papers or conduct online classes. Some also pointed out that the admission process would be under way in September for the new session to start in October. As it is, Kumar Ashutosh, nodal officer of College of Vocational Studies, revealed that evaluators already faced a huge task to “identify, stack and locate answer sheets” sent in multiple forms through the exam portal and email.
What about students whose online answer sheets weren’t received or were garbled? Rajdhani College professor Pankaj Garg said, “We don’t have information whether such students are to come for the physical exams. Wouldn’t that be unfair for the students?”
In Video:Delhi University in race against time for September 14 exams