Woodpecker Territorial Wars are So Intense, Some Birds Travel Several Miles to Watch Them

Acorn woodpecker battles overprized territory is a serious business. Researchers found that spectators flew in from kilometers to watch the fights and collect valuable social information from the power struggles. 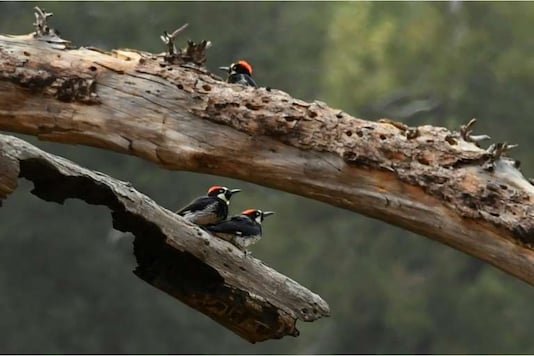 Acorn woodpeckers look for bugs in a dead tree in the Angeles National Forest where the Bobcat Fire is burning above Duarte, California. Credits: AFP

Acorn woodpecker battles overprized territory is a serious business. Researchers found that spectators flew in from kilometers to watch the fights and collect valuable social information from the power struggles. AFP Last Updated: September 9, 2020, 9:05 AM IST FOLLOW US ON:

Acorn woodpeckers wage battle royales that last days in order to win valuable territory vacated by deceased counterparts, according to a new study Tuesday that used radio tags to track the warring birds.

Researchers also found that spectators flew in from kilometres around to watch the fights, collecting valuable social information from the power struggles.

The paper was published in the journal Current Biology and led by Sahas Barve, a postdoctoral fellow at the Smithsonian National Museum of Natural History.

"When you're approaching a big tree with a power struggle from far away, you'll first hear a lot of acorn woodpeckers calling very distinctly, and sea birds flying around like crazy," he said.

"When you get closer, you can see that there are a dozen or more coalitions of three or four birds fighting and posturing on branches," he added, meaning each battle can involve 40 or 50 woodpeckers.

"One group has to beat all the others to win a spot in the territory, which is really, really rare in animals."

In order to make sense of the chaotic scenes, the scientists placed radio tags on the backs of 36 acorn woodpeckers in California.

The woodpeckers were fighting for control over "granaries" -- large acorn storage structures consisting of acorns stuffed into thousands of individual holes in the bark.

The granaries are valuable mating sites, housing multiple male and female breeders, and their non-breeding offspring.

When a breeder dies, nearby groups of non-breeding birds form same-sex coalitions of either sisters or brothers to try to win the vacant spot for their group's breeder.

The radio tag data showed that some birds returned for several days to engage in up to 10 hours of hostile spread-wing displays, incessant calling, and intense fighting that was at times fatal.

"We didn't think it could be that long because they have to be away from their home territory," said Barve. "When do they eat? We still don't know."

The team had hypothesized that woodpeckers would fight hardest for territories closest to their current home, but found that more complex social forces were at play.

"These birds often wait for years, and when there's the right time, and they have the right coalition size, they'll go and give it their all to win a really good territory," said Barve.

The sophisticated social behavior was also seen in the fact that the battles attracted large crowds of up to 30 birds, some traveling as far as three kilometers.

They came for up to an hour a day to watch the fights, despite many already having granaries of their own.

The researchers inferred that the benefits of social information must outweigh the costs of leaving their homes unattended for so long.

Acorn woodpeckers live in tight social networks and know everyone's place because of their frequent travels to other territories.

"If anything is disruptive to that, or if anything weird happens, they want to go check it out," said Barve.