A real-live footage of two feisty cats going at each other on a rooftop, very much similar to the tragic scene from Lion King. 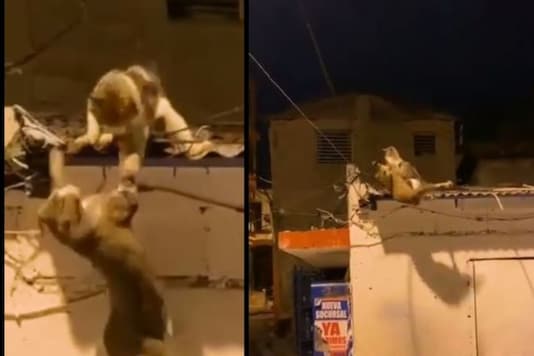 A real-live footage of two feisty cats going at each other on a rooftop, very much similar to the tragic scene from Lion King. Trending Desk Last Updated: September 10, 2020, 10:22 PM IST FOLLOW US ON:

Netizens are reliving the experience of the famous fight between Mufasa and his evil brother Scar on the edge of the cliff in the 1994 movie The Lion King. No, we are not talking about the 2019 film in which Bollywood King Shah Rukh Khan rendered the voice of Simba in Hindi.

What we have here is not a scripted movie but real-live footage of two feisty cats going at each other on a rooftop, very much similar to the tragic scene in which the Lion King Mufasa, betrayed by his own brother, loses his life. The resemblance is uncanny.

The 72-second video clip that has now gone viral on Twitter, Facebook and other social media sites show the two cats relentlessly fighting each other, who knows why. Territory perhaps? Were the brothers too?

Kudos to the person who captured the drama on camera. But credit also goes to the person who did the editing. Throughout the clip, the famous music from the said movie is superimposed over the original mews of the cats and the playback shows frame by frame comparison between the cat fight and the lion fight.

Undoubtedly, the viewers are bound to be hooked till the end, which doesn’t disappoint. Much like in the movie, one of the cats lies hanging off the roof (cliff in the movie), with the other one holding it for a while before dumping it. Mufasa, the cat falls and Scar walks away.

In the movie, Mufasa’s son Simba, who was also cheated by his uncle Scar, blames himself for his father’s demise and runs away. He returns from exile years later, with his friends Timon and Pumba to take his revenge and reclaim his throne.

While we couldn’t find Simba in the video, we do hope that the cat landed safely and would live to fight another day.