WATCH: Man Spins Five Footballs at a Time from the Comfort of His Couch

He not only is spinning five footballs, but also using a phone to record his stunt. 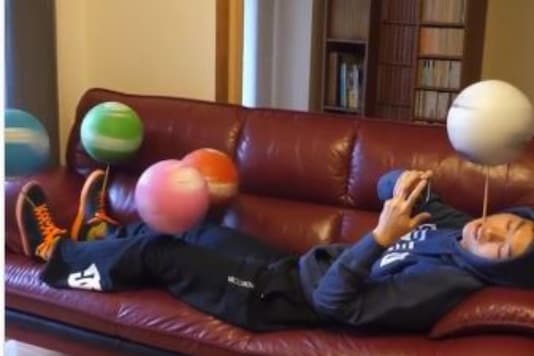 Screenshot of the video showing the man spinning five footballs at a time.

He not only is spinning five footballs, but also using a phone to record his stunt. Trending Desk Last Updated: September 9, 2020, 4:47 PM IST FOLLOW US ON:

A man spinning five footballs at a time while lying comfortably on the couch has awed the Internet after it was posted on Instagram. on a couch.

In the clip, he can be seen holding a stick between his teeth on which a ball is spinning. As the camera shows him in a complete frame, four more balls are seen spinning on sticks all over his body. What has caught netizens’ attention is that he is doing this comfortably lying on a couch, using his phone.

The caption of the video, which was shared last month, reads, “Bored in the house in style.”

It has received more than 17,000 likes and is flooded with comments.

Responding to the post, a user said, “Now that’s some talent right there!”One person said it was amazing, while another called the man cool.A user said it’s a nice work, while the other wrote, “nice one lad.”

Some people tagged their friends in the post so that they can see too. A person, however, called the video fake. Another said it was insane level of talent.

A few days ago, a video of man exhibiting his extraordinary driving skills did rounds on social media.

The clip, which was shared on Twitter, shows the man taking out a car from a tricky spot. The car was parked next to a sidewalk and it seemed impossible to manoeuvre the vehicle out from there as there was almost no space to adjust the car.

However, the man used his skills and pull off the task which seemed impossible.

What impressed netizens that he did it with a manual vehicle. It did not have 360 degree cameras, proximity sensors and other upgraded features.