Watch: Bride Caught Brawling with Guests in Wedding Dress to 'Not Spoil' Her Day

The bride named Zoe Dallimore was captured brawling in the field on the night of her wedding. 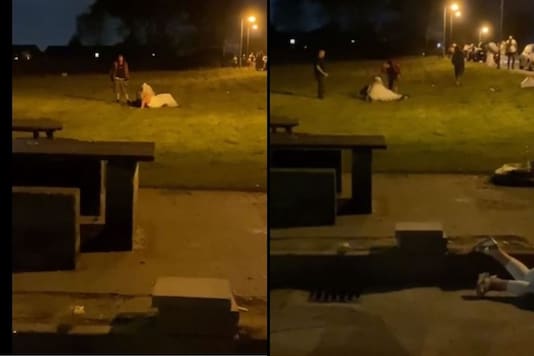 Video grab of bride picking up a brawl.(Credit:Reddit)

The bride named Zoe Dallimore was captured brawling in the field on the night of her wedding. Trending Desk Last Updated: September 10, 2020, 2:46 PM IST FOLLOW US ON:

A recent video of a bride brawling in her wedding dress has gone viral on the internet. The astonishing video has definitely left people stunned.

As reported by Fox News, the incident took place at a rugby club in Swansea, South Wales.

The bride named Zoe Dallimore was captured brawling in the field on the night of her wedding. In the video posted on Reddit this Sunday, the bride can be seen in her white ball gown, tiara and veil tackling a man.

However, the bride claimed that she wasn’t involved in any fight, but was just trying to break up a fight that was going among a group of strangers. She was quoted saying by The Sun, “I didn’t throw any punches or get punched. I was just trying to break up an argument. I didn’t want anything to spoil my wedding day. When I heard this group of people arguing, I wanted to break it up because I didn’t want anyone getting upset and wrecking my day.”

She explained her part, saying her only intention was to break the ongoing fight and bring the people to peace.

She also revealed that the woman who was seen lying unconscious on the ground in the starting of the video was one of her friends, who fall to the ground accidentally.

As the video went viral, the rugby club where the incident took place also issued a statement. It reads, “We are aware of a video being circulated from last night at the club, after a wedding party ended there was a fight outside the club. It was a private function and no one affiliated with the club were involved. We hope everyone is safe”.

The club also stated that the police were informed and people were removed.