Want to See Your Hometown’s Location 750 Million Years Ago? This Paleontologist Has a Map For You

An interactive map developed by a software engineer lets you see where your hometown was located on Earth in the ancient past. 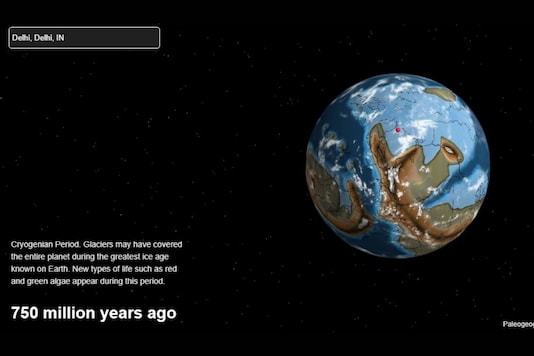 An interactive map developed by a software engineer lets you see where your hometown was located on Earth in the ancient past. Trending Desk Last Updated: September 8, 2020, 5:53 PM IST FOLLOW US ON:

The history of Earth includes shifting of locations due to the continental drift. The place that is located at a particular point today might have had a different location millions of years ago.

A paleontologist from California has developed an interesting interactive map that lets users determine the location of their hometown 750 million years ago, reported CNN.

For instance: If you enter New Delhi, the red dot will start to blink on the globe where New Delhi was located in a particular time period. There is also an option to choose if you want to see the location of the city 750 million years ago or 600 or 540 or the latest being 20 million years ago.

Ian Webster, 30, has developed this online map, which has tools that can help users access discoveries about the location of first reptiles and flowers. The map also allows you to check whether dinosaurs lived nearby your location millions of years ago.

Webster’s app is using the geological model of Christopher Scotese’s map, which describes tectonic plate development since 750 million years ago. Scotese is also a paleontologist and geologist. Webster’s map sits on top of Scotese’s map in the application.

The interactive map also uses a tool called GPlates, which is popular among geologists. The software provides an interactive visualization of plate tectonic reconstruction.

Speaking to CNN about his invention, Webster said that the app shows that the Earth’s environment is dynamic.

He said, “The history of Earth is longer than we can conceive, and the current arrangement of plate tectonics and continents is an accident of time. It will be very different in the future, and Earth may outlast us all.”

Webster also said that his interactive map simplifies complex information so that people can learn about the history and science of Earth.

Hoping that his map will generate appreciation for the work of scientists, Webster said, “It is meant to spark fascination and hopefully respect for the scientists that work every day to better understand our world and its past.”