A kid goat was found trapped in a pit and a video of its reunion with its mother was share don Reddit. The post has since gone viral. 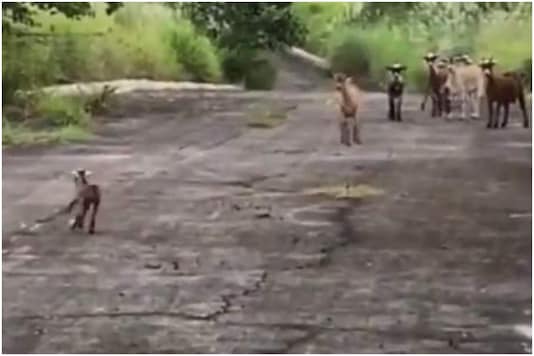 Viral video of goat meeting its mother after being stuck in a pit is getting lots of love on the internet | Image credit: Reddit

A kid goat was found trapped in a pit and a video of its reunion with its mother was share don Reddit. The post has since gone viral. Trending Desk Last Updated: September 12, 2020, 1:49 PM IST FOLLOW US ON:

Getting lost and separated from its parents is every young creature's worst nightmare. Perhaps the universality of the sentimentis why a video of a baby goat reuniting with its mother after being lost is going viral on the internet.

Shared on the subreddit 'aww’, the video was recently posted on Reddit by a user called 'kdearceo'. The post soon went viral and has already garnered over 1.2 lakh upvotes and more than 1,300 comments.

The caption accompanying the video read, "We found a kid goat trapped in a pit yesterday. Took care of it overnight and decided to find the owner but to no avail. "

The caption went on to add that they, however, managed to witness something even better. According to the user, they found a group of goats with the same white fur on top of their heads, and tried to put the kid on the ground in front of the other goats.

The reddit user described what happened next as "Ninja chopping onions moment."

For the unversed, the 'aww' subreddit is full of content and 'things that make you go AWW!' And this one surely did.

A number of people shared heart-warming comments to the post. One user wrote, "My mother was a Vet and she would say ‘The animals can't really thank-you, but we can... Thank-you for this’."

A second user posted, "I have replayed this so many times that it has warmed my cold and distant heart."

A third user went on to write, "I watched it with the sound off and was like yeah that's cute. I turned the sound on and watched it again and now I am ugly crying. When he finally hears his mom yell back you feel his sense of excitement and relief. "