Actor Varun Dhawan surprises his fans as he shares a droolworthy picture with girlfriend Natasha Dalal on his Instagram page. Varun captioned the picture as, "No I won't be afraid just as long as you stand by me." The picture has 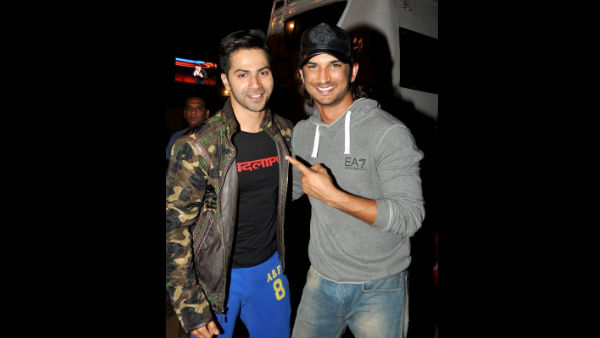 Actor Varun Dhawan surprises his fans as he shares a droolworthy picture with girlfriend Natasha Dalal on his Instagram page. Varun captioned the picture as, "No I won't be afraid just as long as you stand by me." The picture has received one million hearts on Instagram, and many B-town celebrities, including Karisma Kapoor, Mahira Khan, Manish Malhotra, Sophie Choudry, Amy Jackson, Amrita Arora and Tahira Kashyap left heart emoticons on it.

In the picture, Varun can be seen in an orange jacket, while Natasha compliments him in flowy pastel dress. As expected, netizens couldn't stop drooling over Varun and Natasha's romantic picture, and asked the duo to get married soon.

For the unversed, before the novel Coronavirus pandemic hit the nation, rumours were rife that Varun and Natasha were supposed to tie the knot by the end of 2020, but now it's not sure when the lovebirds will get hitched.

Not so long ago, while speaking to Hello! magazine, Natasha, who's a fashion designer by profession, spoke about her lovestory with Varun and had said, "Varun and I were in school together. We stayed friends until we were in our mid-20s and then, I remember, we started dating just before I moved away. It was around then that, I think, we realised we were more than just good friends."

Why Did Varun Dhawan Get Slammed By Netizens Despite Coming Out In Support Of Sushant Singh Rajput?

She had also addressed the rumours of her wedding with Varun and shared, "Marriage is on the cards eventually, just not right now."

In another interview, Varun had also spoken about Natasha and said, "She and I went to school together. So, she knows my parents since ages. She's been attending functions with my parents before also but it wasn't photographed then. She's my rock, she's my anchor. She's the stabilising factor in my life. It's pretty much like family."

With respect to work, Varun will next be seen in Coolie No. 1 which also stars Sara Ali Khan in the lead role. The film is helmed by David Dhawan and will have a digital premiere owing to the ongoing pandemic. The release date of the film hasn't been announced yet.