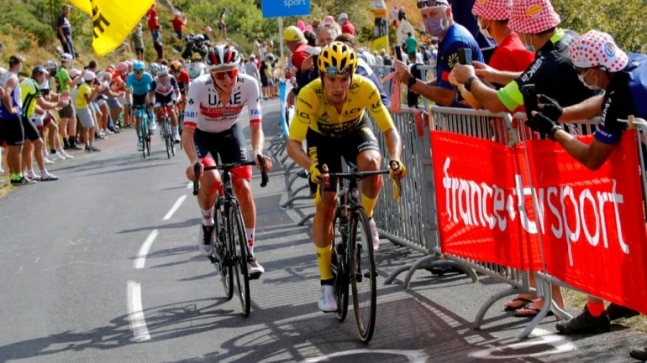 Primoz Roglic tightened his grip on the Tour de France overall lead as he dropped defending champion Egan Bernal in the final ascent of a gruelling 13th stage in the Massif Central on Friday.

Colombian Dani Martinez prevailed from the breakaway at the end of a punishing 191.5-km trek from Chatel-Guyon before the big guns battled it out in the finale of the short, yet brutal climb up to the Puy de Mary, where the average gradient rose above 11%.

Ineos-Grenadiers Colombian leader Bernal, who fares better on longer ascents, could not sustain the pace when Tadej Pogacar accelerated, with fellow Slovenian Roglic the only rider able to follow.

The duo crossed the line 38 seconds ahead of a grimacing Bernal, who slipped to third in the general classification, 59 seconds off the pace.

The 21-year-old Pogacar, the most aggressive of the main contenders who was already the best man in the Pyrenees last weekend, is now second, 44 seconds behind Roglic.

"The Tour is not finished yet, there is still a lot of things that can happen, a lot of riders are still in the mix," said Roglic.

Eight riders are still within two minutes but Roglic has been the most impressive, never losing his cool despite Pogacar's repeated onslaughts.

"I don't want to bother looking at names and comparing myself with others. I'll continue to focus on myself," said Vuelta champion Roglic.

Bernal saw Roglic and Pogacar fade in the distance as his face turned into a mask of pain in the last two kilometres of the ascent to the Puy Mary.

The Colombian collapsed on his bike after the finish, mumbling: "I looked at my numbers, they're good, the others are just better."

Bernal will now have to throw everything in the biggest battle of this year's Tour, the 17th stage, which finishes in Meribel 2,304 metres above sea level atop the Col de la Loze, an unforgiving 21.5-km climb at an average gradient of 7.8%.

Friday’s stage signalled the end of French hopes as Romain Bardet, who started the day in fourth place overall 30 seconds off the pace, ended up 2:30 behind Roglic after the 2016 runner-up took a heavy tumble earlier.

The AG2R-La Mondiale rider crashed on a descent and quickly got back on his bike, but had to sit down again because of a bout of dizziness.

Guillaume Martin, third overall at the start, cracked in the penultimate climb and crossed the line 2:46 after Roglic.

Martinez, who featured among the dark horses before the start in Nice after winning the Criterium du Dauphine but lost all hopes in the first week, outsprinted Lennard Kamna for the stage win.