The Fashion Show Will Go On. But How?

On December 31, 2019, health officials documented the planet's first cluster of novel coronavirus cases. Ten weeks later, on March 11, 2020, the World Health Organization declared a state of pandemic. In the window between those two dates, the world played host to 4,617 new COVID-19 cases and 280 ...Continue reading

On December 31, 2019, health officials documented the planet's first cluster of novel coronavirus cases. Ten weeks later, on March 11, 2020, the World Health Organization declared a state of pandemic. In the window between those two dates, the world played host to 4,617 new COVID-19 cases and 280 deaths — and at least four global fashion weeks across the U.S. and Europe.

Here stateside, New York Fashion Week's Fall 2020 season was decidedly the industry's last gasp of normalcy. By the time the fashion tour arrived in Paris in late February, the writing was already on the wall: As the New York Times wrote back in March, "The crisis has accelerated a question hanging over fashion in recent years. Runway shows are expensive, laborious and environmentally harmful. Are they still worth absorbing an entire month?"

It's been six months since, and with 6.3 million cases of the illness recorded in the U.S. alone, it's clear we're not yet in a position to answer that question. (Though in all likelihood, the reply will be a resounding and unencumbered no.) But on Sunday, New York Fashion Week begins its Spring 2021 season regardless, with 60 "presentations" listed on the CFDA's official calendar. (In February, as Vogue noted, that number amounted to 177.) Yet some of New York's biggest names — like Michael Kors, Tory Burch, Proenza Schouler, Brandon Maxwell and Prabal Gurung — do not appear on the schedule at all; Marc Jacobs opted out of the Spring 2021 season altogether, with his customary time slot now filled by Eckhaus Latta.

Of this 60, a small group — including Jason Wu and Rebecca Minkoff — will be holding in-person events in "strict compliance" with New York State health and safety guidelines. The rest will take place digitally, either by livestream, video or something else entirely. It will look exactly nothing like the New York Fashion Week that once packed Spring Studios elevators with equal parts showgoers and Santal 33. But the fashion show will go on, in whatever capacity New York State allows it to.

"New York City is the fashion capital of the world, and New York Fashion Week celebrates the ingenuity of this city, and our unmatched creative talent," Governor Andrew Cuomo said in a statement this August. It's not just talent (and entire business sectors like textile manufacturing and production) that New York Fashion Week supports. It is, was, also a major revenue source. According to past estimates, the event generates nearly $900 million per year, with up to $500 million in tourist spending. So back in May, IMG, the owner and producer of NYFW: The Shows, reached out to New York State officials to learn what was and wasn't possible given the delicacy of public health and safety. By the time the CFDA released its formal calendar in August, IMG (in conjunction with the State Department of Health) had finalized a 30-page briefing document outlining policies and precautions for those few presentations that would take place off-screen. For example:

These measures include policies, procedures, precautions and screenings, including: restrict all gatherings to 50 or fewer people and less than 50 percent of the maximum occupancy for a particular area as set by the certificate of occupancy; adhere to social distancing at all times; ensure all personnel, vendors, designers, models and guests comply with the provisions of the State's travel advisory; diagnostic testing and health screening procedures, including temperature checks prior to admittance; limit in-person workforce to only essential personnel on site; and require face coverings at all times.

"We don't just produce the hub for fashion week," says Leslie Russo, executive vice president of IMG's Fashion Events Group. "We sort of represent the entire wheel — I always say 'the donut' — of the ecosystem. For us, it was really important to see that all parts of the industry were able to get back to work."

The discussion between IMG and New York State — now in Phase 4 of reopening — took all summer, but Russo explains that the duration enabled the organization to create something more nuanced than a plug-and-chug solution. If a brand did want to present in-person, given all required safety precautions, it was IMG's job to determine if that was even possible — and if so, how they could pull it off.

"The number-one priority for us coming out of the February season was taking a step back and watching what was happening, and that included understanding what challenges designers are facing in their businesses," she adds. "We took our time to develop something that we felt provided as many solutions as possible for designers and brands because ultimately, it's not really a one size fits all, right?"

Take Kim Shui, who built her eponymous, now-Instagram-beloved label on activities in which we can no longer participate. In an interview with Fashionista last September, the Central Saint Martins-trained designer likened her garments — upper-thigh-grazing hems, body-con minis, lace bodysuits — to the following: "You're going to 1 Oak, but you're not really going to 1 Oak." Her runway shows, all throbbing music and intentionally-close-knit seating arrangements, are as much of a party as the settings in which she imagines you wear her clothes.

"We just felt like we couldn't properly replicate that experience for this season, so it didn't make sense for us to go that route," says Shui. Instead, during her 5 p.m. digital activation slot on Wednesday, Shui will debut a film she calls "real, authentic and raw," though she's tight-lipped about all other details. 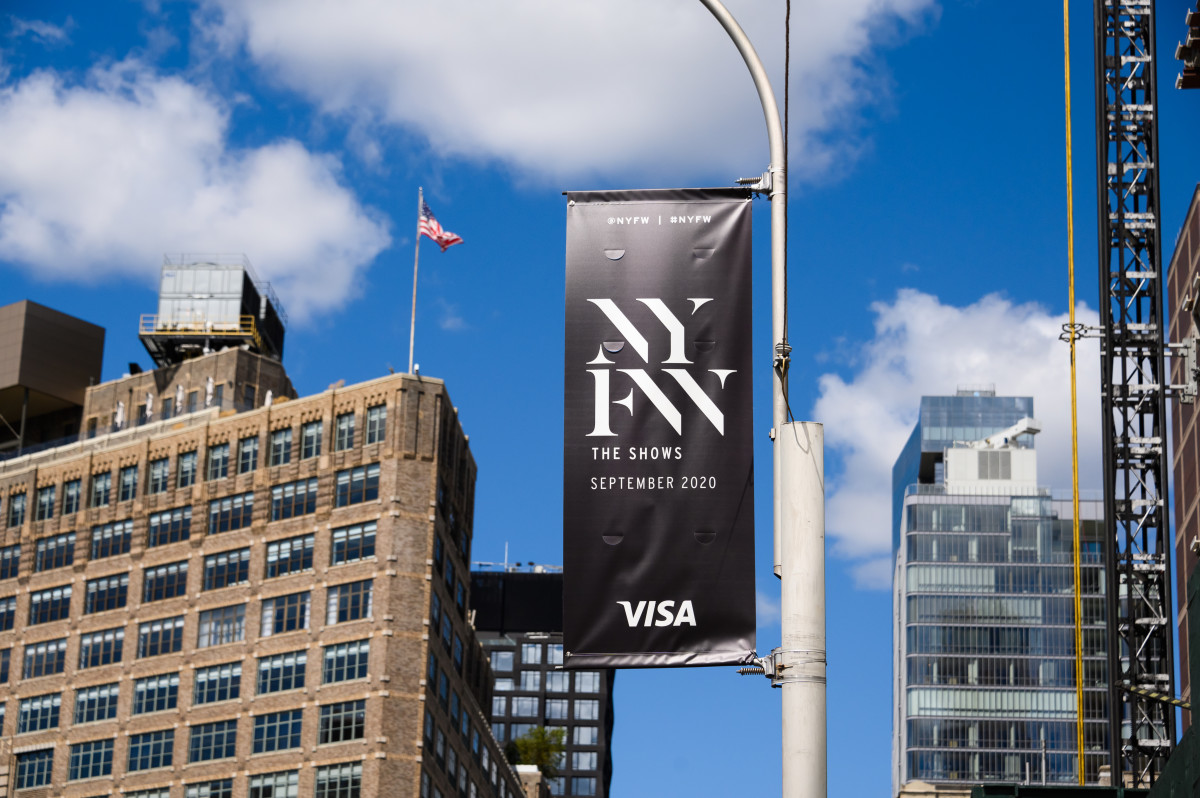 A NYFW: The Shows flag is seen near Spring Studios as New York City continues Phase 4 of re-opening, with additional restrictions.

Cambridge, England-native Christian Cowan, too, has chosen an alternative this season, both out of personal preference as well as geographic limitation. While based in New York, Cowan is a U.K. citizen who has been working in the U.S. on the so-called "artist visa." "I'm transferring onto my Green Card and just before I had my embassy interview, they closed the embassy," says Cowan, calling from London, where he's remained for much of quarantine.

"I didn't want to do a show myself just because, as a younger brand, I thought, 'Well, how can we use our budget to get maximum impact?' And I just feel like that wasn't with the show this season, especially with the fact that attendance is pretty much impossible," he adds. "Well, we may as well use this opportunity to do something we've never been able to do before."

Like Shui, fellow Central Saint Martins graduate Cowan will be releasing what he calls a "creative shoot project" in partnership with a "very famous celebrity." One-hundred percent of the profits of this collection, he says, will be going toward a yet-to-be-disclosed charity. The campaign — for which he tapped neo-pop photographer Vijat Mohindra, who most recently directed Miley Cyrus's "Midnight Sky" music video — was crucial. "I want to sell as much as possible so we can give a really big donation," says Cowan, who is now helping to spearhead both video and photo shoots across Los Angeles, New York and London. "It's basically like having three shows to organize."

Related Articles:
With Production Resuming, TV and Film Costume Designers Are Going Back to Work — Cautiously
Quarantined Consumers Are Still Shopping for Clothes — But They're Putting a Lot More Thought Into It
'Would Would We Feel If a Client or Employee Died After Contracting the Virus at Our Salon?'

It's a welcome challenge, though, and one that was born out of one luxury that contemporary fashion designers are not often granted these days: time.

Fashion has been in the throes of a designer-burnout problem for years, the contributing factors of which have been picked and poked apart ad nauseum by sites just like this one. But the global shutdown has, in fact, empowered New York's designers to make decisions based on how they, and they alone, would like the world to (safely) witness their designs — quite simply because they now have the time to do so.

"There will always be some brands that will never leave the normal schedule because they've done it that way for a hundred years. But lots of people realize they can get a better result with less finances, frankly, with this new way of doing things," says Cowan. "There's no reason it has to be so strict — but I do think people still love shows."

Stay current on the latest trends, news and people shaping the fashion industry. Sign up for our daily newsletter.