The catch? You have to get down on all fours to see them, tucked away as they are at the bottom of buildings, just big enough for mice. 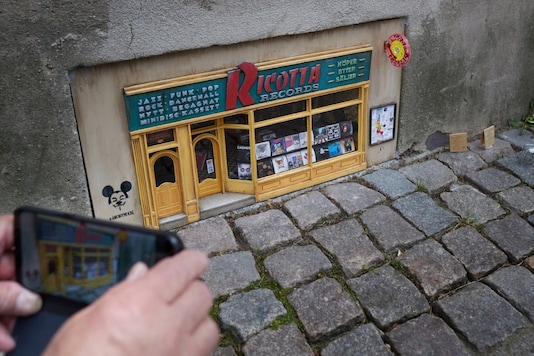 An art installation made by the artist collective Anonymouse in the Nygatan street in Lund, Sweden. (AFP)

The catch? You have to get down on all fours to see them, tucked away as they are at the bottom of buildings, just big enough for mice. AFP Last Updated: September 13, 2020, 10:35 AM IST FOLLOW US ON:

They're drawing crowds in Sweden: cute and quirky shopfronts, delis and restaurants created by a mystery art collective called "Anonymouse" that have popped up out of nowhere in some cities.

The catch? You have to get down on all fours to see them, tucked away as they are at the bottom of buildings, just big enough for mice.

"It's like a treasure hunt," 29-year-old Madeleine tells AFP in Lund, a picturesque university town in the south of the Nordic country where the collective's latest works are on display.

Hidden away in knee-high crevices around the city, the works often take the form of mundane locations, such as student dorms or a restaurant, but always at a scale more welcoming to small rodents than humans.

Most often they include cheesy puns, like the music shop "Ricotta Records" which sells classic albums like "Back to Brie" by "Amy Winemouse" and "Stilton John"'s "Goodbye Yellow Cheese Roll".

The anonymous team behind the creations has been working together for four years, and the installations, which are temporary, are exclusively made of recycled materials.

"It's the big world made small," 64-year old social worker Bengt tells AFP, walking past to admire one of the works.

"There is almost always a message in them, it makes you think a little about how people are doing," 43-year-old Maria adds.

Remaining clandestine is a top priority for "Anonymouse."

So when the Lund municipality commissioned some of the works, they did not even know where to send the check.

They now have 26 creations to their name, including soup kitchens, antique shops and a private detective's office, though they are always temporary and usually stay up for a few months.

Their works have also been seen in other cities in Sweden and beyond, in Bayonne in France and on the Isle of Man in the UK.

Reflecting on the Covid-19 pandemic, their first creation in Lund was a mouse pharmacy, complete with a sign encouraging visitors to "Wash your paws."

"The only thing that made sense was to build a pharmacy to somehow comment on the current global situation," a spokesperson, who introduced himself as Yasha Mousekewitz, told AFP via email.

Their creations have also been a hit on social media and the collective has garnered more than 139,000 followers on Instagram.