Sona Mohapatra Has 10 Points on How to Really Smash the Patriarchy in Bollywood, We Agree

Want to smash patriarchy but don't know how? Here's a refresher by singer and actress Sona Mohapatra. 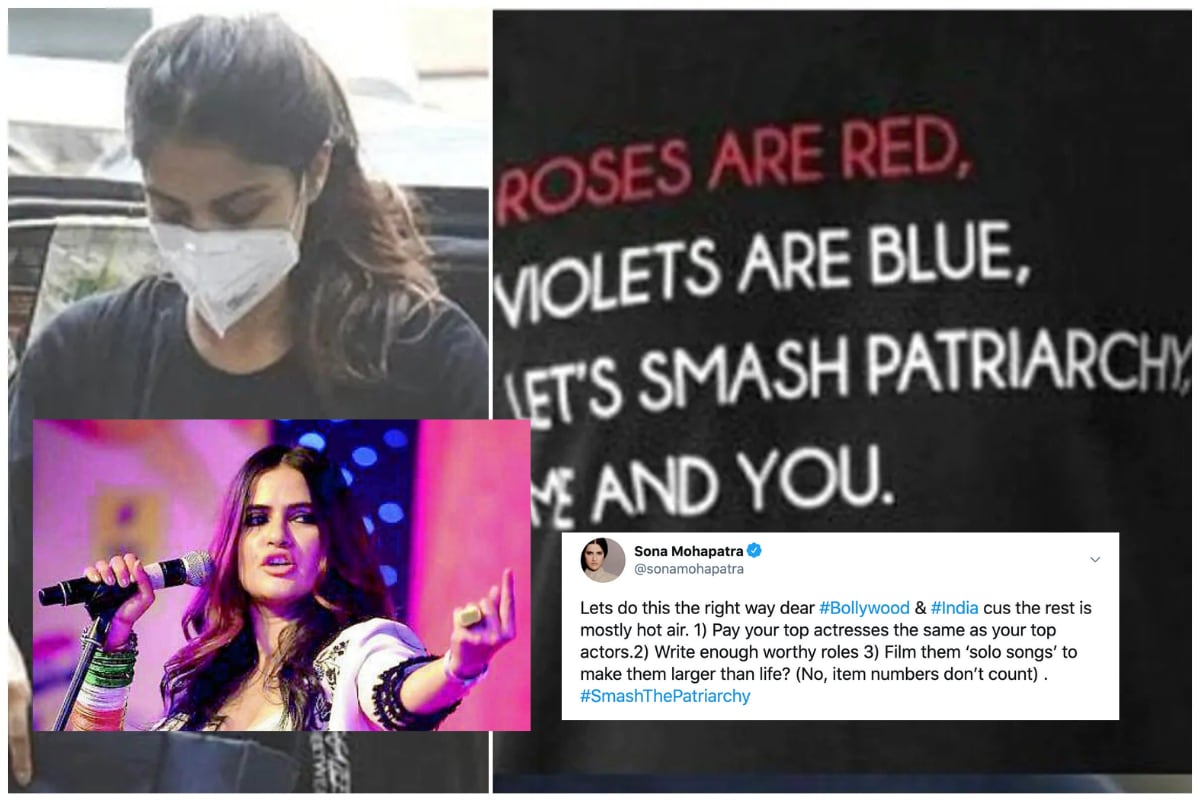 A lot has been said in recent times about "smashing the patriarchy" in Bollywood since actor Rhea Chakraborty wore a t-shirt that reminded the world of gender injustice.

It was a powerful moment when the 28-year-old actress stepped out of her car to appear for a Narcotics Control Bureau hearing days after being violently heckled by a mob of journalists while leaving the very same premises after an initial round of questioning.

"Roses are red, violets are blue, Let's smash the patriarchy, me and you", her brave t-shirt read. Coming in the face of a diatribe of malignant and misogynist scrutiny directed at her in the spotlight of tv news cameras, the t-shirt became more than just a piece of clothing - it became a symbol of resistance.

It also became an easy catchphrase for many in the country - including her peer, colleagues and supporters in Bollywood - to get away with riding the popular #SmashThePatriarchy wave. No sooner did the news of her arrest get out, Bollywood actors, filmmakers, musicians and others working in the industry spoke out in support of the Chakraborty and against the unfair media trial and undignified reporting she had been subjected to ever since the death of her reported boyfriend and actor Sushant Singh Rajput.

While the social media solidarity was peachy and led to several Twitter trends, it didn't really serve the main purpose which was to smash the patriarchy. Because smashing the patriarchy does not end with a tweet. It goes deeper than just social media chatter and outraging within echo chambers.

Responding to the #SmashthePatriarchy trend, singer and actress Sona Mohapatra came up with ten points to better explain how Bollywood and those working can ACTUALLY smash the patriarchy in the Indian film industry.

"Lets do this the right way dear #Bollywood & #India cus the rest is mostly hot air", she said. Here are Sona Mohapatra's 10 recommendations for smashing the Patriarchy in Bollywood.

The singer starts simple. The gender wage gap in Bollywood is not a new phenomenon. Actresses are widely known to get paid less for an equal share of work and also command less respect and appreciation for their work. In recent years, several actors including male "superstars" like Shah Rukh Khan have accepted that the wage gap exists. (Incidentally, a man had to come put and say it for people to finally take it seriously). Actors like Priyanka Chopra, Deepika Padukone and Kangana Ranaut. Priyanka is the first Bollywood actress to ever demand a profit share in a film, and get it.

Male-centric scripts and plots have forever been the norm in Bollywood with all major directors and filmmakers (who are also predominantly male) choosing male heroes to star as the main protagonists with females relegated to providing supporting relief or, at worst, act as a stage prop in a bikini in songs. If one wants to smash the patriarchy in Bollywood, Mohapatra thinks writing worthy roles for women is an important starting point. We agree.

Lets do this the right way dear #Bollywood & #India cus the rest is mostly hot air. 1) Pay your top actresses the same as your top actors.2) Write enough worthy roles 3) Film them ‘solo songs’ to make them larger than life? (No, item numbers don’t count) . #SmashThePatriarchy

3. "Film them in ‘solo songs’ to make them larger than life? (No, item numbers don’t count)"

The point needs no further explanations. Stop using women as props to lure men into movie theatres or to boost sales through lascivious videos. And if you still think this isn't true, take a look at all the women-centric songs in the past five years and how many of the were item songs.

Mohapatra takes a turn toward sensitive-ville at this point when she asks those in the industry to "Speak up (at least once?) about ur superstar of ages". Without taking any names, she refers to them as a 'poster boy of toxic masculinity, a bully, serial abuser of women’s rights." And yet, "directors, producers, writers scramble to create more virtue signaling films for him? Actresses bend backward to star in them," the singer said. We are going to leave it at that.

5. "Be more inclusive in ur choices of film technicians"

This is one is a fairly common complaint. Women technicians are often given short shrift by virtue of their gender. "Don’t assume a female DOP cannot shoot a big-budget film because she’s not ‘strong’ enough?! Some of the best films in the west are shot by women!My fav; Ellen Kuras. Movie camera Eternal sunshine of the spotless mind," Mohapatra says.

"Worry and do something about the horrendous statistics of only 8/9 songs out of the 100 released by you having a female singer in #Bollywood. The solo female songs always reprise versions, never to be promoted. The duets having us in chorus only?" While female singers like Lata Mangeshkar and Asha Bhonsle, and in recent years, Shreya Ghoshal, Sunidhi Chauhan and Mohapatra herself among others have made a mark for themselves in the industry, it still seems to be a man's world when it comes to playback singing if the 'Bedardi Raja' singer is to be believed. "The industry regressed on this matter only in the last 10-15 years," Mohapatra tells News18. "There was a time when we couldn’t put out a soundtrack without the Mangeshkar sisters but Shreya and Sunidhi are our last female biggies," she says. That was 20 years ago. Mohapatra feels that since then it has just been a stream of "testosterone driving the music".

"Every three years we crown a new male superstar and ply him with hundreds of songs," she says. And what about women? "The 8 in 100 releases get distributed to give each of us possibly half a release," the singer says.

7. "Be ashamed of the systemic-institutional sexism"

The singer then goes on to launch a scathing attack on the industry in this point. "Be ashamed of the systemic-institutional sexism, misogyny & lopsided power structure in the industry where NOT ONE lead actress or actor spoke up about the inconvenient truths in the #MeToo movement. Almost everyone looked the other way," she says. The comment comes after nearly a year of the Me Too movement in India which saw several prominent journalists, actors, and celebrities accused by survivors of harassment, only to be forgiven, supported or even protected by their industry friends and peers while the allegations slowly got wiped out from public memory.

Giving a shoutout to actress Anushka Sharma for working with women directors in recent ventures as a producer (Bulbull), Mohapatra advises other producers to "Trust women directors" to work on "bigger production budgets" and "not just the ones from the film families" but also independent women filmmakers. "They are less likely to blow it up on wasteful ego-driven choices," Mohapatra says, adding that financing a woman driven project is "difficult as hell".

n a point that might shatter many a male ego, Mohapatra says, "Stop casting 50 plus Male ‘heroes’ in romantic angles with women half their age..." Do we really need to say more?

Mohapatra signs out but not before pointing out that while male actors got to act 20 somethings in their 50s, older women are not even cast for older's women's' roles. "Cast older actresses for older women’s roles at least? Also, why should lead actresses be pushed to retirement and oblivion in their mid 30’s while men carry on endlessly??" Mohapatra asks.

The list is endless, really. And while it is easy to jump on the bandwagon of smashing the patriarchy and supporting women's rights to win brownie points as a feminist, it is much harder to take institutional measures to actually reverse the patriarchal structures (and the unsung hard work of women) upon which the industry has been built.

We have one word for Mohapatra's thread: WIN!