Is is okay to justify or ignore the threat of physical violence against Kangana Ranaut while we 'smash the patriarchy' to support Rhea Chakraborty? 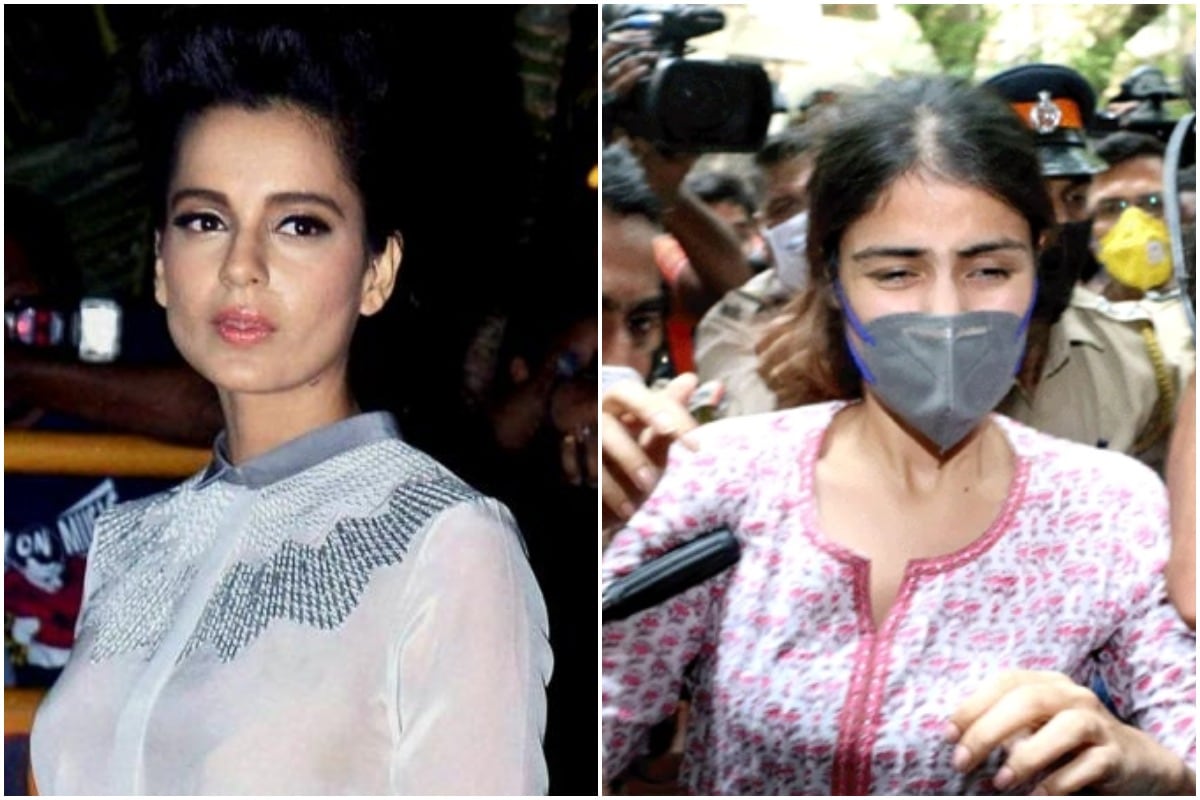 Patriarchy has once again become a topic of conversation in India following the prolonged media trial of Bollywood actor Rhea Chakraborty, who was recently arrested by the Narcotics Control Bureau. The actor, who is currently being investigated by three of India's top investigating agencies - Crime Branch of India (CBI), Enforcement Directorate (ED) and the NCB - caused an uproar on social media when she appeared at the NCB office for questioning, dressed in a "smash patriarchy" t-shirt.

READ: Rhea Chakraborty's T-Shirt is More Than 'Roses Are Red.' It Promotes Campaign On Sanitary Napkins to Rural Women

In the months since actor Sushant Singh Rajput's death by suicide on June 14, Rhea has been the target of an intensive hate campaign and an invasive, highly spurious media trial. On Sunday, the 28-year-old was mobbed and heckled by paparazzi while leaving the NCB office after an initial round of questioning.

In just a few days, it became apparent that the constant scrutiny and questions raised on Chakraborty's character were not helping investigators find out the "real" cause of SSR's death, (which Mumbai Police had initially ruled out as suicide) but helping quench many a sexist man's (and woman's) need to quash young, independent women at any chance they get. Remember the "Bengali women do black magic" trend?

While many were blamed for the actor's harassment including political parties, Sushant Singh's Rajput's family and lawyer, TV anchors and actress Kangana Ranaut, it is interesting to note that the latter is the only one among them to have faced sexism in return.

The curious case of Kangana Ranaut

Ranaut was one of the first actors in Bollywood to dismiss depression as the cause of Rajput's death. After first attacking nepotism and actors like Alia Bhatt, she went on to attack mental health and actors like Deepika Padukone. After Rajput's family mounted allegations on Rhea Chakraborty for allegedly deceiving him and duping him of money and investigators found out a "drug angle", Ranaut started her anti-drugs campaign, claiming 90 percent of the film industry was on drugs. She also called Mumbai Police inefficient and biased for not being able to find out the truth in SSR case or bust the drug mafia of Bollywood.

While we have to agree that Ranaut made vile, uninformed comments on many things including mental health, her attacks on Shiv Sena and Mumbai Police instantly earned her some sexist barbs from politicians. In the past couple of weeks, as the war of words between Ranaut and Sena intensified, the actor was subjected to a number of sexist slurs including Sena spokesperson Sanjay Raut calling her a "ha***khor ladki" (scoundrel girl) on air, and issuing veiled threats against her return to Mumbai in his editorial in the party's mouthpiece Saamana. While Raut's threats were veiled, Sena leader Pratap Sarnai even said that Sena "warriors will break her face" in case she returned.

The comments came after Ranaut claimed that Mumbai was like Pakistan occupied Kashmir.

While Ranaut's own comments reek of communal hate and divisiveness, and the actor herself commands an army of trolls ready to fight her battles in the drop of the word 'nepotism', the attacks of her prove that no matter who you are or what you support if you are a woman, you will face sexism, one way or another.

Ranaut has forever been a thorn in the eyes of liberals, feminists and critics of the government, thanks to her vapid series of rampantly sexist, and often hate comments. But the recent comments against her forces one to think - is lawlessness an answer to lawlessness? What is one to make of the threats of violence made by the members of the ruling dispensation of a state against a woman? Does this not promote violence against women?

The problem with using a short-sighted definition of patriarchy as the peg to fight battles for a woman (or against her) requires one to analyse it from all sides. Just as the hounding, heckling and constant abuse of Rhea Chakraborty in the name of "justice for Sushant" is patriarchal, so is threatening to break Kangana Ranaut's face because she questioned the Maharashtra government.

To say that Ranaut invited the sexism, the trolling and the attacks in response to her own sexism and trolling is the easy way out. It is almost like saying "she was asking for it". And we all know how that narrative goes.

Let this be clear, once and for all. No woman is asking for gendered threats of violence, misogyny or sexism, no matter what her stand or her acts. In the case of foul-mouthed public figures like Ranaut, the censure must come not from sexist netas but from the Constitution of India itself and the Indian Penal Code which bans hate speech while upholding the right to freedom of expression. Calling Mumbai "Pakistan" is not okay. But threatening the woman who said it with physical violence in return is not okay either.

No country for women

Chakraborty's "smash patriarchy" t-shirt has forced Indians to once again talk about patriarchy. Many celebrities have sounded the bugle, sharing the quote from Chakraborty's t-shirt and adding their support to smashing the patriarchy. Meanwhile, supporters of Ranaut and the "team SSR" (and she herself) have called out Shiv Sena for its sexism and glorified Ranaut as a victim. Unpopular opinion as it might be, they are not wrong. Both of them are victims of patriarchy, even if the impact of it is vastly different on both individuals.

It is not possible to call out sexism and patriarchy against Chakraborty while ignoring the same against Ranaut, despite the difference in degree. Sadly for misogynists, there is no such thing as "sexism beats sexism". The same is true for Team Kangana who is now crying foul at Sena's comments. If you are against the verbal abuse against Ranaut, you can not support her indulging in the same against others.

We all want to "smash patriarchy", true. But as long as we continue to selectively mute out sexism and only adhere to tenets of feminism at convenience when one of our own (or ourselves) are under attack, patriarchy will keep rearing its ugly head.