'It’s clear you are not sesquipedalian nor given to rodomontade. Your ideas are unembellished with tortuous convolutions & expressed without ostentation,' Tharoor wrote. 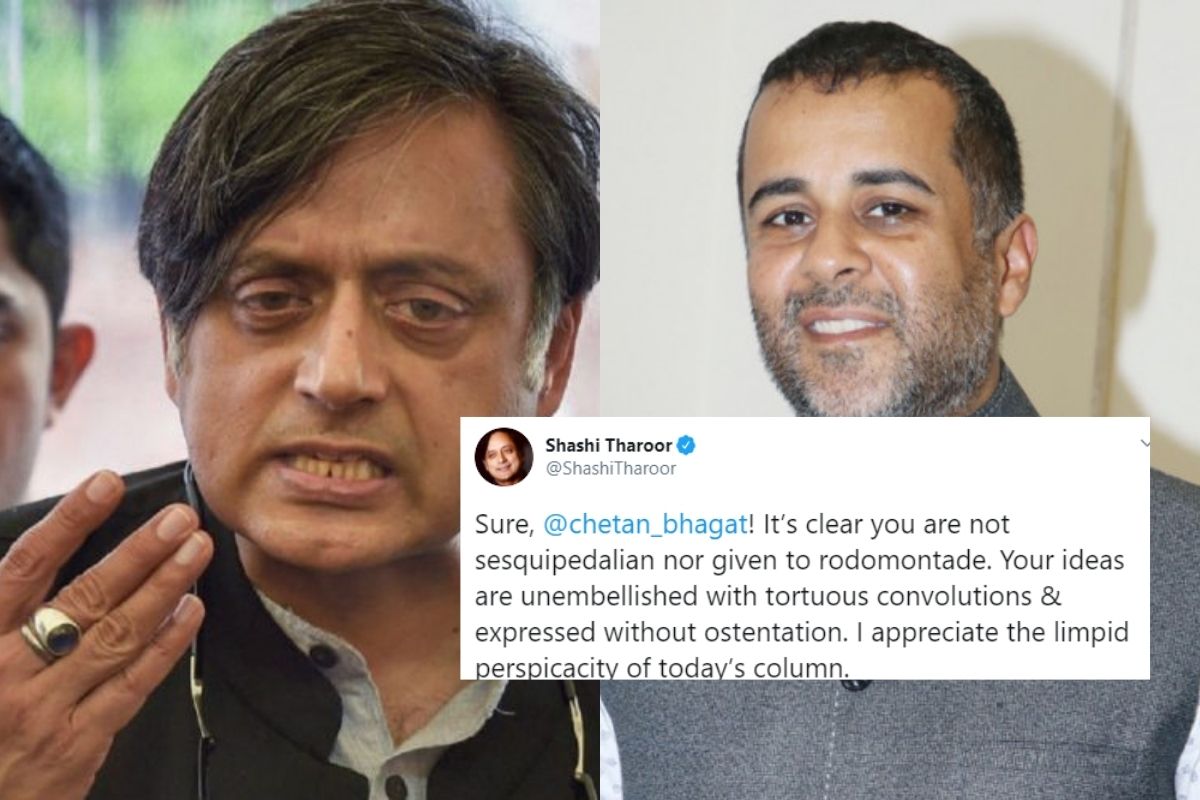 'It’s clear you are not sesquipedalian nor given to rodomontade. Your ideas are unembellished with tortuous convolutions & expressed without ostentation,' Tharoor wrote. News18.com Last Updated: September 14, 2020, 10:56 AM IST FOLLOW US ON:

Senior Congress leader Shashi Tharoor and author Chetan Bhagat on Sunday had a rather interesting exchange on Twitter, one that had us looking for our dictionaries, like most of Tharoor's tweets do.

It all started when Tharoor heaped praises on an article by Bhagat in the Times of India titled "The youth need to shut their phones and ask about the economy." Tharoor called it a "superb piece."

Superb piece by @chetan_bhagat on all that ails our country & what we should do about it. Chetan’s great virtue is the simplicity and directness of his writing. His message is clear & I hope his fans in the government act on it. https://t.co/j6vDHCe0SS

Bhagat retweeted his tweet and said he couldn't believe that Tharoor had praised his work. He then proceeded to request Tharoor to praise him using big words the next time. He also said that while "superb" is nice, a big word from Tharoor would make his day.

"Just one request sir, next time can you use some big words to praise me, like ones that only you can do. Superb is nice but a big one would really make my day!" Bhagat tweeted.

Tharoor obliged. And how.

"Sure, @chetan_bhagat! It’s clear you are not sesquipedalian nor given to rodomontade. Your ideas are unembellished with tortuous convolutions & expressed without ostentation. I appreciate the limpid perspicacity of today’s column," he tweeted in response.

Sure, @chetan_bhagat! It’s clear you are not sesquipedalian nor given to rodomontade. Your ideas are unembellished with tortuous convolutions & expressed without ostentation. I appreciate the limpid perspicacity of today’s column. https://t.co/GI3mbnlion

Now, how many of these words seem unfamiliar to you? It's okay, we get it.

Let's break it down.

"Sesquipedalian" refers to long, complex and polysyllabic words. "Rodomontade" means talking in a boastful manner. "Unembellished" basically means lacking in any form of embellishment or anything that is decorative. "Tortuous" indicates something that is full of twists and turns. "Convolutions" is used to describe something that can be complex and a little difficult to follow. "Ostentation", while it can be used differently, here refers to a flamboyant display. "Limpid" refers to a style that clear-cut, straightforward and simple. "Perspicacity" means having a keen insight into the way things are.

Piecing this together - Essentially, Tharoor praised Chetan for his simple and clear (limpid) style and said that he is not given to a long, complex form of writing that can be difficult to follow. Instead, he opts for a simple and more straightforward manner of writing in the article which Tharoor greatly appreciates.

This is not the first time Tharoor has left netizens scratching their heads though.

READ: Shashi Tharoor’s New Book 'Tharoorosaurus' is Not For People With Hippopotomonstrosesquipedaliophobia

READ: Floccinaucinihilipilification: Learn How To Pronounce The New Word With Shashi Tharoor Himself

A few days ago, Tharoor announced that he will be releasing his new book, the Tharoorosaurus, which is a Thesaurus and dictionary all rolled into one. The book which is published by Penguin Random House India and will have 53 words, one for each letter of the alphabet.