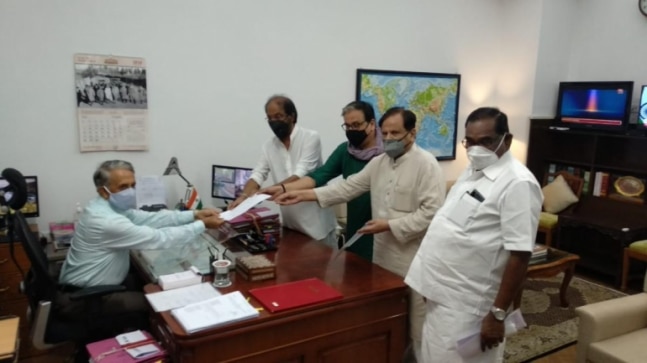 Rashtriya Janata Dal leader Manoj Jha on Friday filed nomination for the post of Rajya Sabha deputy chairman as the opposition's candidate. Manoj Jha will be contesting for the post with NDA nominee Harivansh Narayan Singh.

The election to the post is likely to be held on September 14.

Harivansh Narayan Singh, a Janata Dal (United) MP, had filed nomination for the post on Wednesday. Harivansh was the RS deputy chairman till his previous term ended in April. He has since been re-elected to the Upper house from Bihar.

Jha was teaching at the Delhi University when he entered politics and became a Rajya Sabha member. He is also the national spokesperson of the Rashtriya Janata Dal.

RJD vs JD-U in Parliament

RJD and JDU are arch-rivals in Bihar where assembly elections will be held very soon and the Rajya Sabha will witness a battle between the two regional parties.

While the JD-U candidate has the full force of the NDA behind it, the RJD candidate comes with the support of Congress, Samajwadi Party, TMC, Left parties, DMK, AAP and Loktantrik Janata Dal, besides RJD.

The NDA nominee and JD-U leader Harivansh has a higher probability of winning the seat.

Harivansh had defeated Congress leader B K Hariprasad last time and won by 125-105 votes in elections held in August 2018. Since then, the NDA has strengthened its position in the Rajya Sabha further.

BJP floor managers are confident of securing the support of about 140 MPs, including the fence-sitters YSR Congress, TRS and BJD.

The strength of the BJP-led NDA has also gradually increased to more than 114 in the House with an effective strength of 244 members as there is one vacancy. However, floor managers of NDA are trying to build a consensus among all parties so that Harivansh Narayan Singh could be elected unanimously.