Searches for the word 'Patriarchy' surged after Chakraborty wore a t-shirt with the quote, 'Roses are red, violets are blue, Let’s smash patriarchy, Me and you 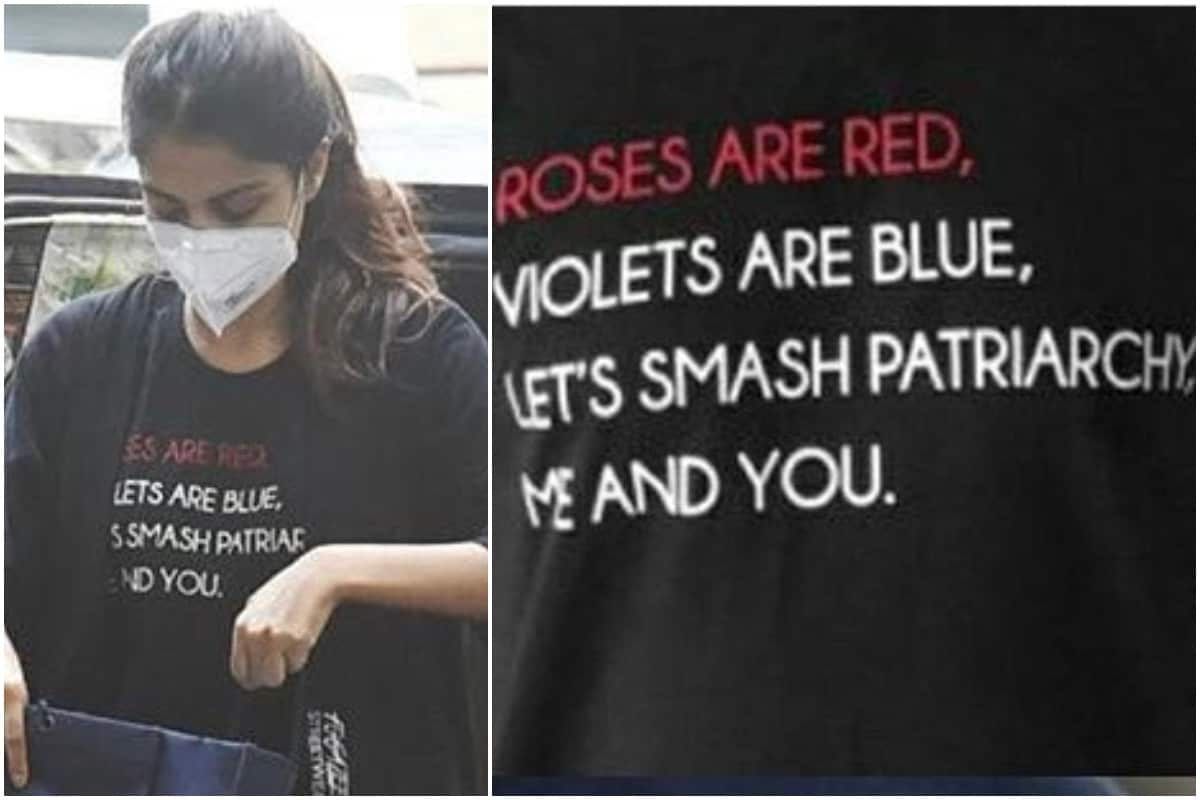 Searches for the word 'Patriarchy' surged after Chakraborty wore a t-shirt with the quote, 'Roses are red, violets are blue, Let’s smash patriarchy, Me and you News18.com Last Updated: September 8, 2020, 6:01 PM IST FOLLOW US ON:

After prolonged controversy, the Narcotics Control Bureau arrested actor Rhea Chakraborty under several sections of the NDPS on Tuesday. The 28-year-old actor who had earlier denied consuming drugs was taken for a medical test shortly and is likely to be produced before a magistrate through video-conferencing for remand in the evening.

As news of the actor's arrest instantly went viral on social media, her name started to trend on Twitter and Google. Interestingly, another top (related) search was "patriarchy".

It appears that several people who searched for news on Chakraborty and her arrest also searched for the meaning of 'patriarchy'.

Before you start to Googling what and why, here's an image of Chakraborty appearing at NCB's office earlier in the morning. But what made news was the quote on her t-shirt.

"Roses are red, violets are blue, Let’s smash patriarchy, Me and you", her t-shirt read. The T-shirt seemed to grab eyeballs on social media.

Searches for the meaning of patriarchy instantly spiked on Google along with searches for Rhea Chakraborty. The searches came from across the country including states like Goa, Maharashtra, Uttarakhand, as well as Delhi and Chandigarh. 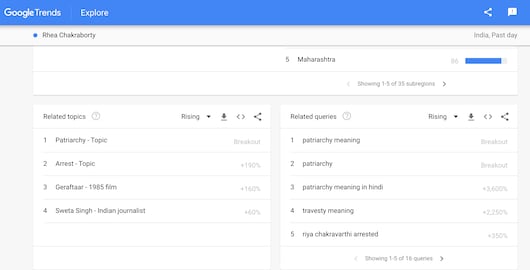 A Twitter user by the name of Anurag Sinha shared the images of the actor appearing from her car in the T-shirt. "Rhea reached the NCB office with a message on her clothes. Decode her arrogant message. #WorldUnitedForSSRJustice," Sinha wrote.

Let me get this straight. You're saying that a system which for centuries literally thought it was ok to throw women into fires, take their labor at home for free, take their bodies without consent, not allow them to work, not promote them at work, harass them at work, https://t.co/8bpVVcNfvh

I don't know anything about the lady in the T-shirt, but I do know what your tweet tells us. That the real arrogance is to be so blind as to wilfully not see how a system operates by design against half of humanity.

Whether Chakraborty is guilty or not is for the courts to decide. But attacking or harassing her the way Indian media has been does indicate patriarchy and there is nothing wrong with proclaiming that it should be smashed.

In case you were wondering what patriarchy is too, here's a refresher.

Patriarchy, according to the dictionary, is "a system of society or government in which the father or eldest male is head of the family and descent is reckoned through the male line". It is a system of beliefs and structures that prefer males not just in the family but also at the workplace and also justifies violence against women as their own fault. It refers to systemic abuse that denies women power or leverage by denying them rights to property, equal wages or, as is the case for most women in India, even the agency to decide for herself.

The fact that Chakraborty chose to wore it following the viral images of her looking helpless and harrassed amid a sea of poking microphones held by male journalists was a not a "bold" move as some might call it. It was a message that the sexism cannot be justified, no matter who a woman and what she has (or hasn't) done.

Meanwhile, all eyes continue to be on Chakraborty, who has been accused of abetting in the death by suicide of her former boyfriend and actor Sushant Singh Rajput. The case is being investigated by the three top agencies - the CBI, NCB and ED.