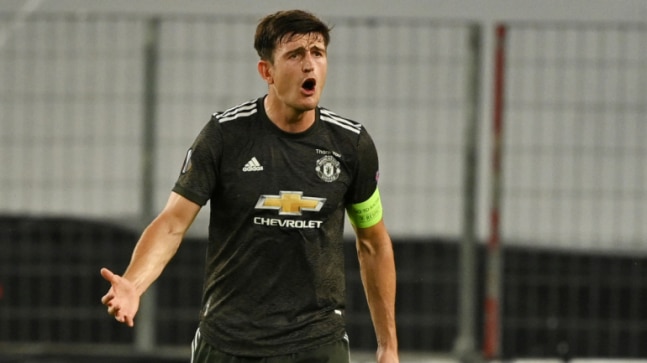 HIGHLIGHTSSolskjær has confirmed Harry Maguire will continue as the club's captainHarry Maguire was handed 21-month sentence in Greece last monthI really hope we can see Harry performing at his best: Ole Gunnar Solksjaer

Manchester United defender Harry Maguire will remain captain of the Premier League club despite being given a suspended prison sentence by a Greek court during the close season, manager Ole Gunnar Solskjaer has said.

Maguire, who joined United from Leicester City in August 2019, was handed a suspended prison sentence of 21 months and 10 days after being accused of various charges following an alleged brawl during a family holiday on the island of Mykonos.

The 27-year-old has maintained his innocence and was granted a full retrial after appealing against the verdict.

"Harry... had a difficult summer. He didn't have a long break. His break was different from others as we gave him a few more days and, after, he's come back and looked fine," Solskjaer told United's website.

"He's handled it really well and, of course, I'll be here to support him. He is going to be our captain. We'll leave Harry and his people and the process to run.

"For me, he is a top, an absolute top human being and has always been a positive guy with the right values. So I really hope we can see Harry performing at his best."

Midfielder Paul Pogba is back in training after his positive COVID-19 test and Solskjaer said he hoped the Frenchman would be available for their season opener at home to Crystal Palace on Sept. 19.

"Paul's had a couple of training sessions so he's lost out on a few sessions because of the virus. But Paul is quick to get fit," Solskjaer added.

"Of course, he worked really hard to get back after lockdown last time and played the majority of the games. Hopefully, he'll be ready for next weekend. I am not 100% sure though."