Nicki Minaj Inspires Chemistry Professor Channel His 'Inner Barb' into Science Question. Can You Solve it?

The Chemistry problem inspired by Nicki Minaj's rap went rounds on the internet and garnered over 1,60,000 likes additionally with 22,000 retweets. 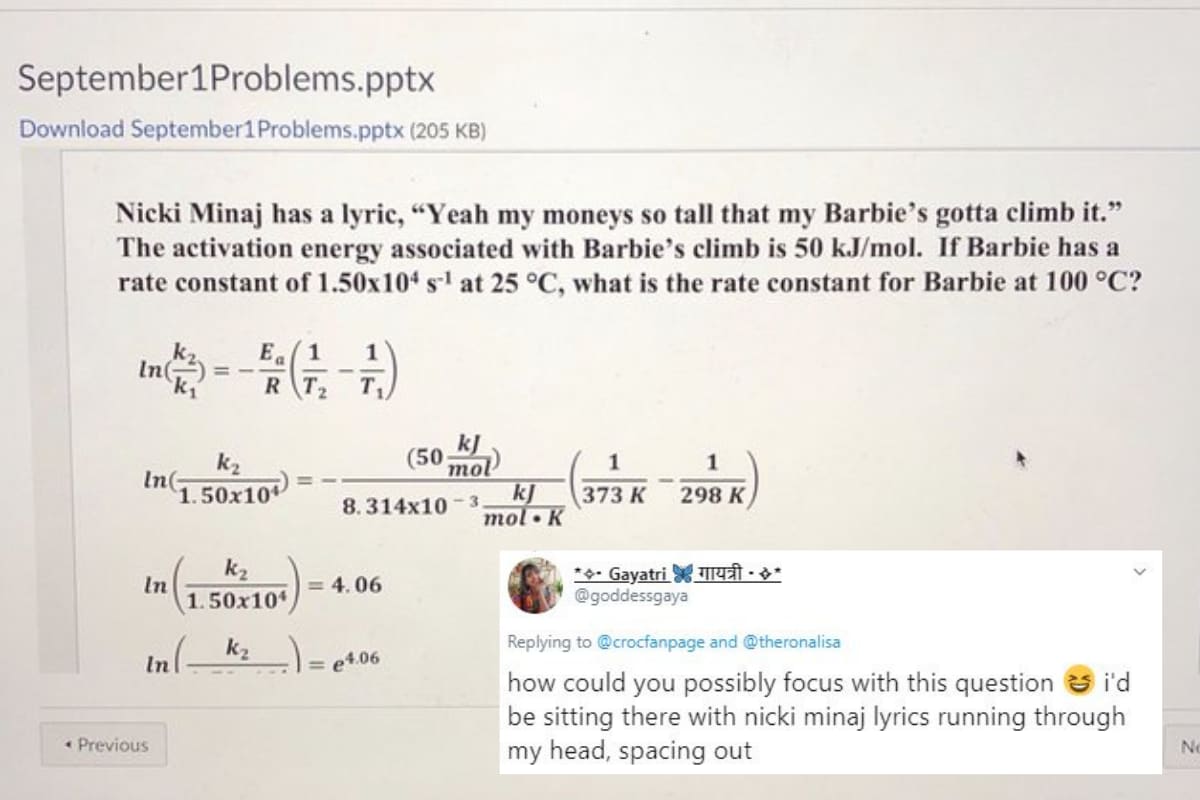 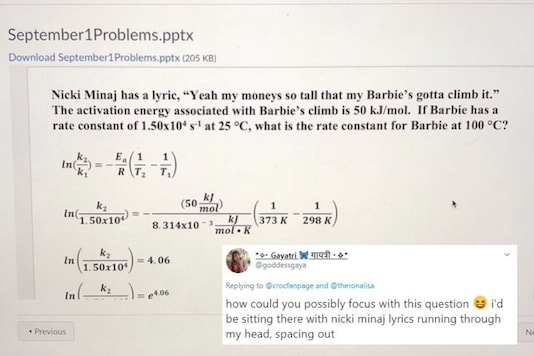 The Chemistry problem inspired by Nicki Minaj's rap went rounds on the internet and garnered over 1,60,000 likes additionally with 22,000 retweets. Trending Desk Last Updated: September 14, 2020, 3:25 PM IST FOLLOW US ON:

American hip-hop artist Nicki Minaj has a creative new fan in a Chemistry professor who is posing some quirky science problems to his students inspired by her songs. The discovery was made after a picture of the question was shared on Twitter which grabbed netizens' attention.

A user named Elise Morgan shared the image of the question which starts with, “Nicki Minaj has a lyric, ‘Yeah my money’s so tall that my Barbie’s gotta climb it’. The activation energy associated with Barbie’s climb is 50 kJ/mol.”

She captioned the image, “My sister’s chem professor is a barb?” Minaj's fans are known as barbs which come from her alter-ego name Harajuku Barbie. The lyrics used in the problem are from Kanye West's 2010 song Monster which features Nicki Minaj, Jay-Z, Rick Ross, and Bon Iver.

Netizens were quick to respond to the quirky Chemistry professor's Nicki Minaj lyrics-inspired problem. Many of them were pumped to solve the problem after discovering their favorite artist's reference, while others demanded their maths professors to take hints and make studying more fun. Barbs also commented that such questions are too distracting for them to focus since they will be more busy humming the hit song.

Somebody also emailed the viral tweet to the said professor, who in his reply confessed that he is a barb. Elise also shared that the professor is a cis heterosexual man who, apart from being a barb, is also passionate about hockey.

I would honestly prefer math problems phrased like this. So easy to digest

supplemental information about him: he’s a straight white man whose two passions are nicki minaj and hockey

Staaap this would make chem so much more fun for meeee