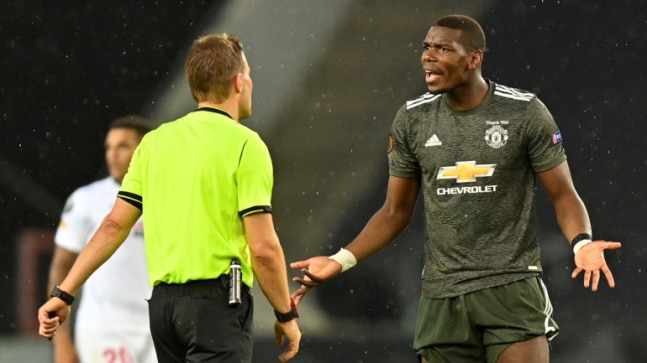 HIGHLIGHTSOle Gunnar Solskjaer says Paul Pogba will miss his club’s friendly with Aston VillaPogba is one of the players who has been troubled by Covid-19, having tested positive for the virusSolskjaer issued Pogba fitness update as Manchester United near Premier League return

Manchester United midfielder Paul Pogba has returned to training after his positive COVID-19 test but is a doubt for their Premier League season opener at home to Crystal Palace next weekend, manager Ole Gunnar Solskjaer said on Friday.

Pogba was forced to withdraw from France's squad for this month's Nations League matches after testing positive for the novel coronavirus.

The 27-year-old has recuperated and is working on his fitness but Solskjaer said he needs more time.

"Paul's had a couple of training sessions so he's lost out on a few sessions because of the virus, of course," Solskjaer told MUTV.

"But Paul is quick to get fit. Of course, he worked really hard to get back after lockdown last time and played the majority of the games.

Pogba struggled with an ankle injury last season but returned after the league's restart in June to help United finish third in the table.

They do not play on the opening weekend of the new season due to their participation in the 2019-20 Europa League knockout phase in August and will kick off against Palace on Sept. 19.