After a month of her demise, the Tamil Nadu businessman unveiled the life-size statue of his wife sitting on a chair and wrapped in a green saree. 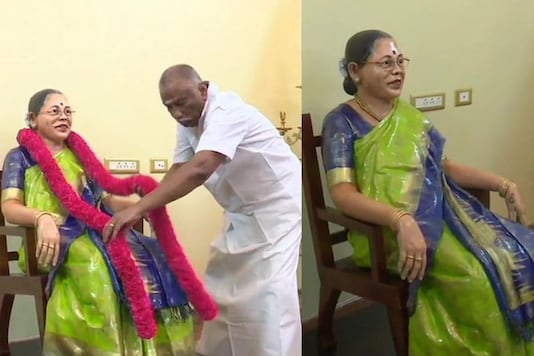 After a month of her demise, the Tamil Nadu businessman unveiled the life-size statue of his wife sitting on a chair and wrapped in a green saree. News18.com Last Updated: September 11, 2020, 2:37 PM IST FOLLOW US ON:

A 74-year-old business from Tamil Nadu's Madurai has installed a life-size statue of his late wife at his home to not miss the feeling of her constant presence.

C Sethuraman from Mela Ponnagaram lost his 67-year-old wife S Pichaimani to heart-attack on August 10, reports The Hindu. Since then, Sethuraman had a difficult time struggling to fill the void of his wife.

A month after her demise, the septuagenarian unveiled the life-size statue of his wife sitting on a chair clad a green saree. It took 25 days for the sculpture to be created.

Speaking to ANI, he said, "I lost my wife recently. But when I look at this statue I can connect with her. Fibre, rubber & special colours were used to make it."

Tamil Nadu: Sethuraman, a businessman from Madurai unveiled a statue of his wife,Pitchaimaniammal,at his home after 30 days of her demise. He says,"I lost my wife recently but when I look at this statue I can connect with her.Fibre,rubber & special colours were used to make it" pic.twitter.com/l5iykI8UCw

The sculptor was made by a Villupuram-based sculptor, Prasanna, who agreed to create and deliver the statue in less a month. Another local painter gave the finishing touch to it to make it more real, reports The Indian Express.

Sethuraman, who owns three big marriage halls in Madurai, said that in his 48-year-long marriage, there wasn't a single day where he would be away from his wife.

"I quit my government job as a health inspector to venture into the real estate business. Through the years, I had faced financial losses several times. But she was always there with me. She was more like my best friend," he said.

Sethuraman drew his inspiration from a Karnataka-based businessman had installed a life-size statue of his late wife during a housewarming ceremony.

ALSO READ: Saw That Viral Life-Like Statue of Karnataka Man's Late Wife? These Sculptors Made it

Decked in a pink saree and gold jewellery, Madhavi sat atop a sofa, with a smile on her face. Her smile, however, never wore off and the guests in attendance were left speechless upon seeing her