Yash and daughter Ayra play with cows during their family getaway 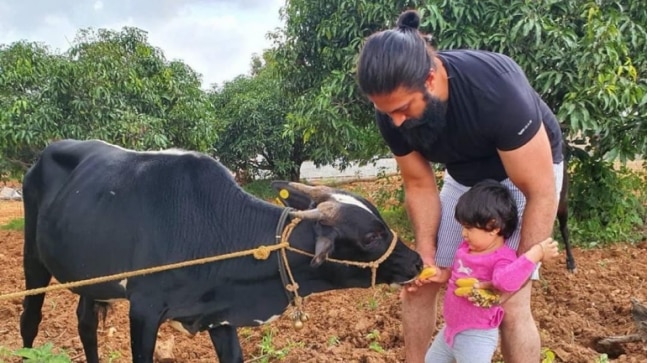 KGF star Yash and his family recently went on a family getaway to their farmhouse in Bengaluru. Radhika Pandit took to Instagram to share an adorable photo of Yash and Ayra feeding their pet cow some bananas. It looks like, Yash, Radhika, and their two kids, Ayra and Yatharv decided to spend some time away from the city to connect with nature.

Ever since the lockdown began, Yash has been spending a lot of his time with his family. Usually, he doesn't get to bond with them because of his jam-packed schedule. Yash is making the most of the lockdown to create some unforgetable memories with them.

Radhika Pandit's photo, which she shared on her Instagram page, has been going viral on social media. She captioned the photo, "Farmhouse diaries #radhikapandit #nimmaRP (sic)."

On September 1, Yash and Radhika Pandit took to social media to release a video announcing his son's name Yatharv. The video shares glimpses of the family from Yatharv's naming ceremony. Along with Yash, Radhika Pandit, Ayra and Yatharv, their family members were also present.

Yash and Radhika Pandit revealed their son's name 10 months after he was born. The couple welcomed their second child, a baby boy on October 30, 2018. Often, they share cute photos of their daughter Ayra and son Yatharv on their respective social media pages.

On the work front, Yash has resumed the shoot of his upcoming film, KGF: Chapter 2, on August 26. Directed by Prashanth Neel, the film's shoot is currently taking place at a studio in Bengaluru, where grand sets have been erected.

ALSO SEE | Radhika Pandit trashes rumours about her son being called Ayush: Junior is getting a name soon