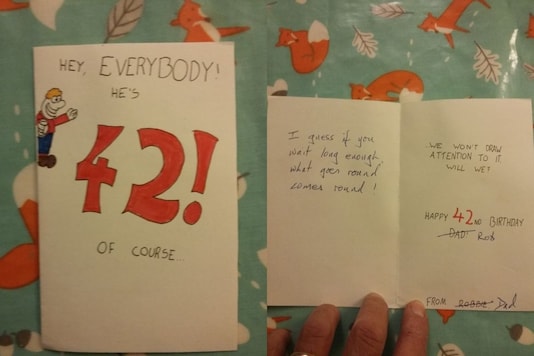 A dad just used his son’s twenty-eight-year-old joke against him in a funny turn of events.

While it’s an exciting day because of presents and celebrations, getting older is a bit of a downer. As we cherish the other gifts in memory of the day, greeting cards are often discarded like the paper-plates used for the cake.

However, in a corner of this planet, one revengeful (and farsighted) dad did not throw away his birthday card. Instead, he saved the card to be used later.

Fast forward twenty-eight years and a man named Rob Witts would be served ‘Karmic justice.’ What the fourteen-year-old Rob failed to realise was his dad’s Dr Evil like planning methods. When he made a joke about his father’s age, how could the poor boy know his father would follow the philosophy of revenge is a dish best-served cold?

Rob Witts (user name Rob Witts is staying home) shared this delightful image on his Twitter handle with a caption, “Fair play to my dad sending me the sarky card I made for his 42nd birthday, astonishing commitment to karmic justice”.

Fair play to my dad sending me the sarky card I made for his 42nd birthday, astonishing commitment to karmic justice.

In the card featured above, the dad has simply scribbled over “dad” and replaced it with his son’s name “Rob.” He also added little words of wisdom to the card. “I guess if you wait long enough, what goes around, comes around,” read the inscription inside the card.

The tweet soon blew-up, garnering over ten thousand retweets and over a hundred thousand likes. Humbled by the virality of the post, he posted “Wow, twitter does love dads! Nothing to promote but please consider donating to help displaced children reach safety.” Along with this tweet was a link to donate to the children’s charity.

However, one snarky user known as @Peterproud9 was quick to comment: “Actually I think twitter loved karmic justice. Happy birthday.”

In either case, we are thankful for this sarcastic dad and son giving us a reason to smile.