Kamal Harris, the running mate pf Joe Biden, has been making repeated allusions to her Indian and Tamilian roots in the run up to the 2020 Presidential elections in teh United States. 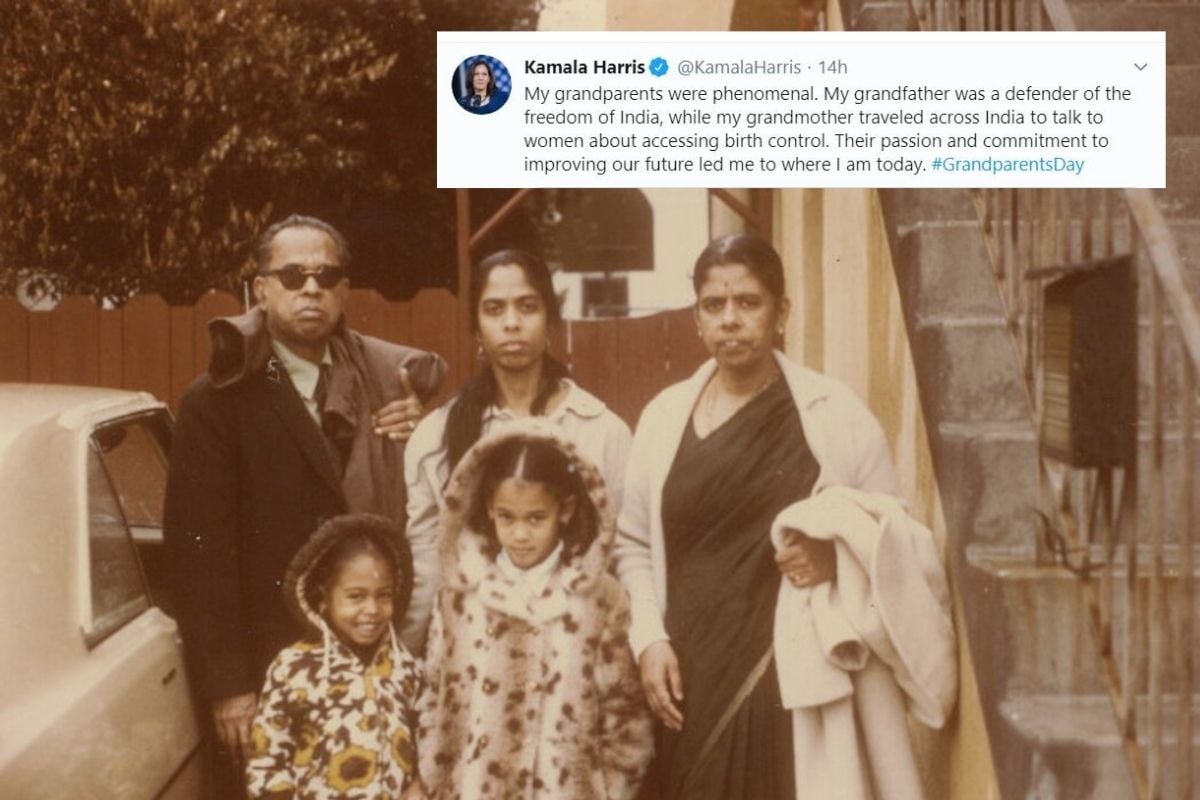 Kamal Harris, the running mate pf Joe Biden, has been making repeated allusions to her Indian and Tamilian roots in the run up to the 2020 Presidential elections in teh United States. News18.com Last Updated: September 14, 2020, 3:04 PM IST FOLLOW US ON:

Ever since Democratic nominee Joe Biden picked California Senator Kamala Harris as his vice-presidential running mate for the 2020 Presidential election, Harris has been hitting quite a number of headlines. And much of the attention has to do with her Indian origin and desi connect.

For the past couple of weeks Harris has been going viral in India for making frequent nods at her Indian lineage, making it a talking point on social media.

On the occasion of Grandparent's Day, Harris, the first black and Indian American on a major US party ticket, took to Twitter to share an old picture of her with her grandparents, calling them "phenomenal".

ALSO READ: The Indian Roots of Kamala Harris are Not Just Her Tamilian Mother and Love for Idlis

Harris said, "My grandparents were phenomenal."

She described her grandfather to be "a defender of freedom" while her grandmother "traveled across India to talk to women about accessing birth control".

My grandparents were phenomenal. My grandfather was a defender of the freedom of India, while my grandmother traveled across India to talk to women about accessing birth control. Their passion and commitment to improving our future led me to where I am today. #GrandparentsDay pic.twitter.com/PA6fmAKr0K

This isn't the first time Harris has paid homage to her grandparents and talk about her "Indian roots" and how they contributed to her present self.

On August 27, the American-Indian took to social media to recall her morning walks with her grandfather, P V Gopalansay, in Chennai's Besant Nagar beach and say=id, "As a young girl, I'd often go on walks with my grandfather in India, who'd discuss how people should be treated equally—regardless of the circumstances of their birth."

ALSO READ: Kamala Harris, First Black Woman With Indian Roots to Run for VP, is Going Viral: For Her Shoes

Harris, who was born in Oakland, California, and whose father is Jamaican, will not only be the first black and Indian American on a major US party ticket. She is also the fourth woman in history to be chosen for on a major party's presidential ticket.

Her mother, Shyamala Gopalan, was born in Chennai’s Besant Nagar and immigrated to the US to attend a doctoral program at UC Berkeley. Like Barack Obama, a mixed-race heritage has allowed Harris to connect across identities and reach multiple audiences and voting blocs.

There is a high-decibel reaction in southern India to the choice of Kamala Harris as the running mate of Democratic candidate for Democrat Joe Biden.

Moreover, ‘Kamala’ is a desi name that that resonates with Tamilian pride.