Kamala Harris, First Black Woman With Indian Roots to Run for VP, is Going Viral: For Her Shoes

Kamala Harris was recently in Milwaukee for campaigning. Yet one thing stood out - her uber cool Converse shoes. 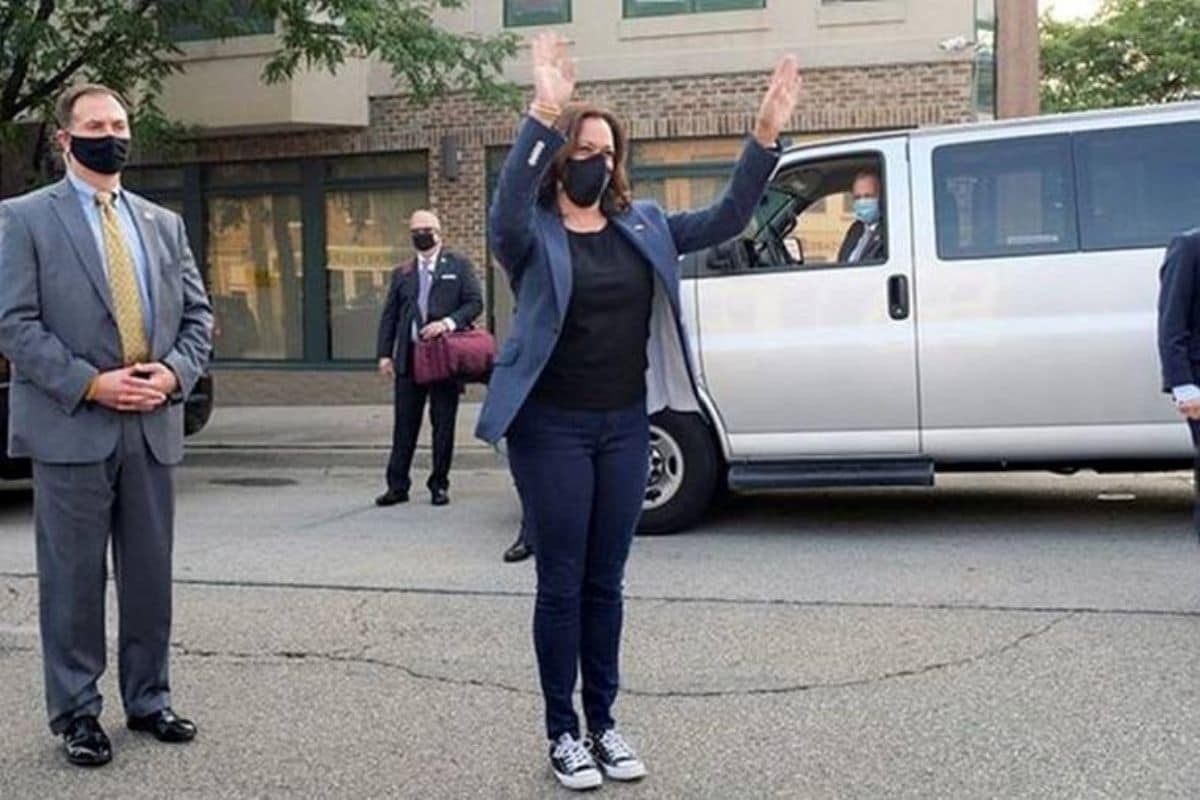 In August this year, Democratic nominee Joe Biden picked California Senator Kamala Harris as his vice-presidential running mate for the 2020 Presidential election. This also makes her the first black woman who also has Indian roots on a major party's White House ticket. Her career as a politician has a record number of firsts, but for the past couple of days, Harris has been going viral for an entirely different reason - her uber cool shoes.

Recently, Harris was in Milwaukee, US for some on-ground campaigning for the upcoming Presidential elections. Dressed in a blazer and casual denims, Harris looked cool, calm and confident; but one aspect of her attire stood out - a classic Converse shoe in black and white, identified as the Chuck Taylor All-Stars shoe.

Very soon, visuals of Harris' shoes became the talking point of the whole world, so much so that her official campaigning profile decided to cash in and work it in her favour. Take a look:

Harris' preference for comfort shoes, over the more conventional stilletos is well-known and has been documented throughout her political career.

There are two things that need to be addressed here. One, of course, Harris' shoes should ideally not be a point of focus given that she is a politician who just embarked on her first solo round of campaigning. In an ideal world, where female politicians would not be judged on the basis of their clothing and their fashion choices are not dissected, the focus would have been on what Harris said to her supporters in the video that went viral.

Not just Harris, women like Alexandria Ocasio-Cortez, who are frequently considered as role models, have a dual role to play - as a politician and a fashion icon. Now, that is not entirely fair given that their male counterparts are spared the constant scrutiny of fashion critics. For instance, when was the last time Donald Trump or Joe Biden were schooled for the wrong choice of tuxes? But when First Lady Melania Trump wore a bright green dress to an event, she was turned into a meme.

But keeping the obvious patriarchy aside, you cannot turn a blind eye to the silent protest and revolution by women politicians of today against what convention dictates they should be dressed like.

Soon after Harris' shoes went viral, her sister and co-chair of her former presidential campaign, Maya Harris tweeted that these Converse shoes were indeed her go-to pair. Washington Post also reported that Harris has the same kind of shoes in multiple colours and often chooses to wear these for her campaigns.

When influential politicians like Harris normalise wearing comfort shoes and sneakers at official events, it echoes what women over the decades have always said - heels, often considered to be a symbol of patriarchal society, are uncomfortable. Imagine running from location to location, campaign meetings to rallies in stilletos? Hurts, doesn't it?

Not just Harris, AOC too had decided to keep her heels aside during her campaign in 2018 and opted for a more comfortable choice.

Some folks are saying I won for “demographic” reasons.

1st of all, that’s false. We won w/voters of all kinds.

2nd, here’s my 1st pair of campaign shoes. I knocked doors until rainwater came through my soles.

Respect the hustle. We won bc we out-worked the competition. Period. pic.twitter.com/RbpQMYTiWY

As a report by GQ noted, politician Elizabeth Warren too opted for sneakers when it came to long meetings and greeting people at campaign rallies.

READ: The Indian Roots of Kamala Harris are Not Just Her Tamilian Mother and Love for Idlis

In short, women like Harris, Warren and AOC have attacked patriarchy through the very thing that patriarchy dictates they be judged on - their fashion choice. So yes, the future is indeed female, albeit, in sneakers.