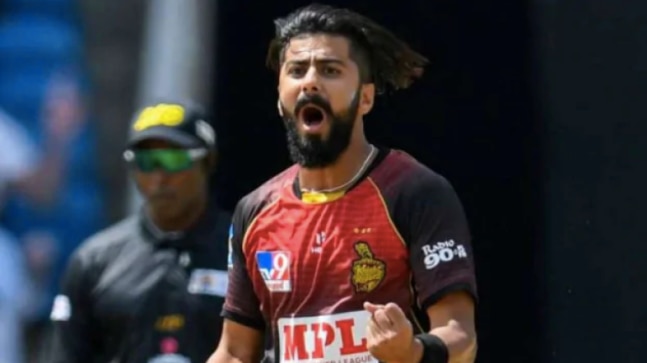 USA fast bowler Ali Khan has been roped in by the Kolkata Knight Riders as a replacement for left-arm pacer Harry Gurney. The English pacer was ruled out of the IPL due to a shoulder injury. The 29-year-old Pakistan-born Ali Khan will be the first USA cricketer to play in the IPL.

The celebrations of Trinbago Knight Riders winning the CPL 2020 can be seen on the official Instagram handles and Twitter handles of the players, especially Dwayne Bravo. Even bigger than the celebrations right now is the Indian Premier League-bound players’ duties towards their respective franchises in the IPL. With the cash-rich event, hosted by the BCCI, starting on September 19 in the UAE, players were seen travelling to Dubai as Dwayne Bravo posted an Instagram story while in the flight. Besides himself and Brendon Mc Cullum, was USA cricketer Ali Khan who was also a part of the CPL-winning side, hence confirming the pacer's participation in the IPL.

Celebrations of winning the Caribbean Premier League 2020 title are still in full flow among the players of the 4-time CPL champions Trinbago Knight Riders squad. TKR skipper Kieron Pollard bagged 4 wickets while Lendl Simmons produced an unbeaten knock of 84 runs off 49 deliveries in Trinbago Knight Riders’ 8-wicket victory over St Lucia Zouks by eight wickets in the final of the Caribbean Premier League (CPL) 2020, on Thursday.

Dwayne Bravo posts flight picture to Dubai on his Instagram.