Into The Wild With Bear Grylls and Akshay Kumar: A piece of cake for International Khiladi

Into The Wild With Bear Grylls: A piece of cake for Akshay Kumar 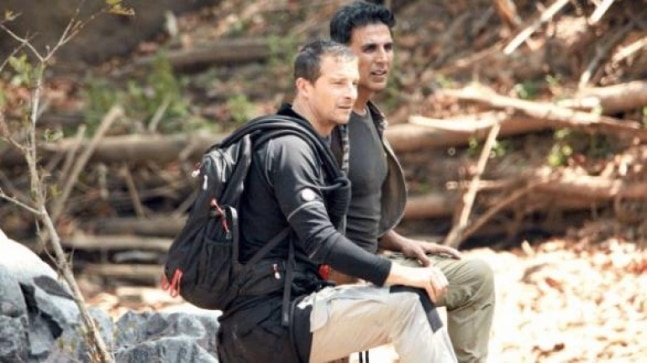 Akshay Kumar's adventurous journey on Into The Wild With Bear Grylls got interesting with inclusions of crocodiles and elephants. However, we've seen him perform much more dangerous stunts in his films. Akshay shot in the same Bandipur Tiger Reserve where Rajinikanth shot for the show. The terrain was similar but watching Akshay on the show was different. As Akshay himself said on the show that he is jealous of Bear Grylls, who gets to explore different places on a regular basis. Akshay had a kid-like enthusiasm while learning new tricks from Grylls.

The episode began with Akshay trying to find Bear Grylls with the help of a compass, map and co-ordinates. Akshay Kumar tried to look for Grylls and climbed trees while doing so. Akshay climbed a tree and shouted, "Oh bhalu, oh Bear."

Soon the survivalist and Akshay Kumar met and greeted each other and climbed a truck. After reaching their starting point, the duo came down from the moving truck. They had to navigate through thick bushes to find a river. Down the river was their extraction point.

While walking through the thick bushes, Akshay Kumar spoke about his parents and childhood memories. Khiladi Kumar talked about the time he and his family lived in a small house with 24 other people. Akshay also shared that he got into sports because of his father, who was a wrestler and in the army.

Speaking about his days in Thailand, Akshay said, "People in Thailand didn't have much money to give tips so women used to come there and peck me or kiss me. That was the tip I got and I miss that."

He also spoke about his children and shared that he would want them to learn on their own. He shared that his son Aarav wants to stay away from the limelight.

Apart from Akshay Kumar and Bear Grylls, the show featured three more celebs - Twinkle Khanna, Suniel Shetty and Katrina Kaif, who had special messages for Akshay Kumar. Akshay's wife Twinkle had a sweet message for him, "If there's one man I could bet would survive in the wild, I would put my money on you. I know how much you love challenges. So, here's to you climbing to greater heights. Make me proud," said Twinkle in her message.

After walking for some time, Bear told Akshay that they will have to climb a tree to check the direction of the river. He asked Akshay Kumar to get on to one of the tallest trees and get the river's direction.

Bear Grylls taught Akshay to make a harness from a rope. With the help of an improvised harness, he climbed the tree and got the direction of the river. The duo stopped for some time and rested under a shade of a tree where Akshay Kumar offered Ayurvedic laddoo, made of apricot tree gum to Grylls.

Bear Grylls was also enjoying the journey with Akshay and even said, "It's great for me doing this journey who is physically capable and strong." Akshay then revealed how from being a martial arts teacher he became an actor.

They crossed the river by pulling themselves across with the help of the improvised harness. However, they had to be careful, as there could have been crocodiles in the river. After crossing the river, they came across elephant dung. They collected the dry one for fire and wet ones for making the tea. Bear Grylls had the tea and said it's not that great, while Akshay Kumar said, "It's nice."

As revealed by Akshay during a live chat, having cow urine did help him in liking the elephant-poop tea. The actor has had cow urine for Ayurvedic reasons. Apart from Akshay's physical strength, viewers will get to know him personally.

The duo also saw a group of elephants by the river. However, Grylls asked Akshay not to disturb them as they can get violent to protect their younger ones. They successfully reached their extraction point without disturbing the elephants, where they had climbed up a rope ladder.

Akshay Kumar was quite thrilled about his journey. He said, "This whole adventure, I'll remember it for the rest of my life now. We came down from a moving truck, went to the jungle, climbed a tree, learnt a new way of tying a harness. This is what I love to do."

The 43-minute episode was a piece of cake for Khiladi Kumar, who performs his stunts in his films and is seen hanging from a helicopter and doing daredevil stunts. However, this episode was a little more adventurous than Bear Grylls' other episodes with Prime Minister Narendra Modi and Rajinikanth. And we also got to see a few animals as well.

ALSO READ| Akshay Kumar on Into The Wild With Bear Grylls: My son wants to be away from the limelight