After reviewing the CCTV and toxicology reports, the CPS told her there was insufficient evidence to prosecute Killick with any offence. Traumatised by what she...

The last thing Emily Hunt remembers about the afternoon of May 10 2015 is enjoying lunch at her favourite restaurant with her father, who was visiting from Ireland. Over Italian food and wine, the pair chatted about Hunt's future plans. The then 36-year-old strategy consultant, originally from New York, had just finalised her divorce and was looking forward to a date with a lawyer the following evening. She also had an exciting job interview on the horizon.

But just five hours later, Hunt woke up naked in a hotel bed next to a stranger, with no idea of how she got there.

The events of that evening - which Hunt still struggles to piece together - would come to dominate her life, placing her at the centre of a battle with the Crown Prosecution Service (CPS) that ultimately led to a change in prosecution policy.

The exhausting five-year campaign, which derailed Hunt’s life and drove her to the brink of suicide, culminated on Friday with the landmark conviction of the man she found herself in bed with. He was named last week for the first time as 40-year-old Christopher Killick, who is unemployed and lives with his mother in Brent, northwest London. He pleaded guilty to voyeurism at Thames magistrates court after he admitted making a 62-second video for the purposes of sexual gratification, without Hunt’s consent.

“It's pretty amazing,” Hunt says from her north London home. She has waived her right to anonymity and spoken widely about the case in an effort to stop anyone else going through the same nightmare.

“Even a couple of days before I wasn't really convinced I'd see justice. I was pleasantly surprised with how seriously they took it in court on Friday.”

Her ordeal started at 10.22pm on that evening in 2015, five hours after she parted ways with her father, when a cold and confused Hunt woke up naked in a five-star London hotel room. Next to her on the bed was Killick - a man she didn’t recognise. He was fully-clothed, flicking casually through channels on the television, she says.

Instantly, Hunt thought she had been violated. She stumbled to the bathroom as she tried to work out what had happened. She had bought a few drinks with her father over lunch, but nowhere near enough to cause a blackout, she thought. She texted a friend, who called the police.

“It was confusing, I didn't know where I was. It took me a little while to begin to understand what was going on. On my way out of the room he tried to stop me from leaving. I was utterly terrified, except at that point I at least knew the police were on their way.”

She fled downstairs and fell into the arms of an officer. She was hyperventilating so much that the police called an ambulance out of fear she was having a heart attack.

Killick was arrested. Condoms and Viagra were found in his rucksack; police also found used condoms in the hotel room. CCTV footage showed the pair kissing and holding hands as they walked to the hotel from a nearby bar (something Hunt doesn’t remember). She says video footage from the hotel shows her “swaying and being unable to stand up on my own, hanging on to him”. Killick is understood to have told police that he had consensual sex with Hunt after meeting her in a nearby bar.

After reviewing the CCTV and toxicology reports, the CPS told her there was insufficient evidence to prosecute Killick with any offence. Traumatised by what she remembered - as well as what she didn’t - Hunt returned to the same hotel nearly a year after the incident and tried to kill herself. Fortunately, she texted her friend about her plans and the police traced her phone to her hotel room before she could go through with it. She was diagnosed with Post-traumatic stress disorder.

The saga took another twist in 2016, when Hunt discovered that Killick had filmed a video of her while she lay asleep naked. “I had to leave the room when the police told me because I thought I was going to throw up. I opted not to watch it. A friend of mine watched it on my behalf and said it was really creepy.”

She submitted a new police report, hoping to get Killick convicted of voyeurism - a crime defined under the 2003 Sexual Offences Act as observing or recording an individual doing a private act for sexual gratification without gaining their consent. Killick admitted that he had taken the video without her consent, for his personal gratification - so Hunt assumed a prosecution this time was likely.

But, to her astonishment, the CPS told her that filming somebody naked in a private room was not illegal if they had previously consented to being looked at naked (in the absence of a rape prosecution, the CPS had assumed their encounter was consensual). “That just seemed insane to me," says Hunt.

She crowdfunded a campaign to push the CPS to reconsider her case, and received support across Parliament. In a letter, the Department for Digital, Culture, Media and Sport (which is responsible for the law on voyeurism) told Hunt they could not change the law because they already considered what happened to her to be illegal. Her case made it all the way to the Court of Appeal, where she was supported by the Centre for Women’s Justice - the same legal team that represented Sally Challen, the Surrey housewife who killed her husband with a hammer after years of abuse. 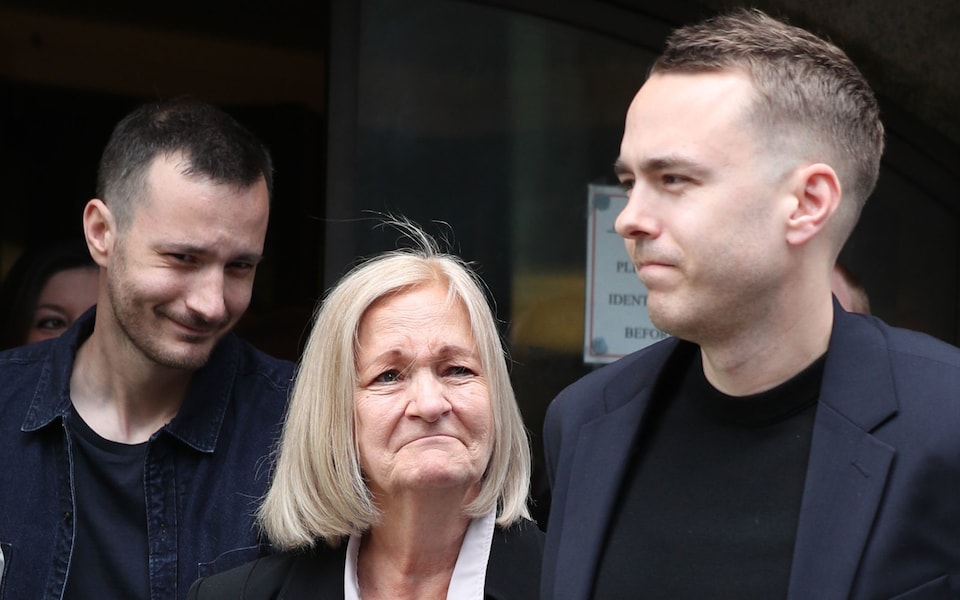 Hunt was represented by the same legal team that fought for justice on behalf of Sally Challen (centre, with her sons) Credit: PA

The court sided with Hunt, and in January the CPS agreed to look again at her case. A CPS spokesman said at the time: “What constitutes a ‘private act’ for the purposes of the offence of voyeurism had never been conclusively defined by a higher court until today. The CPS does not make or decide the law; that is the remit of Parliament and the Courts respectively.”

Hunt says: “For me, the biggest win was in January when my team and I helped clarify that what happened to me is against the law. Having my attacker convicted is the icing on the cake really.

"I had no idea how much of a weight that was going to lift off my shoulders. All of a sudden all of this actually had some meaning. I'd been fighting this for so long, and then [we] changed the way the CPS had to read the law. And that protects other people."

Killick was eventually charged with voyeurism. Hunt did not want to be in the same room as him and so watched his trial from a side-room. He will be sentenced in September.

Hunt, a mother-of-one, is now keen to move on from this chapter of her life. But she plans to continue discussing her case with whoever will listen, and is writing a book about her experiences to push for further change within rape prosecution policy.

“I am not remotely unique, and I am not alone in this experience. Every time there's a story about me, someone reaches out and tells me how it made them feel like they weren't alone, or like it wasn't their fault, and like they can talk to people about it. And so for me, it's really important to have a story out there so people can feel a bit of hope.”

This article has been aggregated from www.telegraph.co.uk and they maybe/are the copyright owners of the same. If you are the Author/Copyright owner of this article and want us to remove the same then send an email to admin@southdelhi.news so that we can delete it immediately. We sincerely regret and apologies for any inconvenience caused to you due to the same. Though it is your decision but please take note that the link to your website and the article have been given above, within and on the bottom of the article.