'Is this the Shandong branch of Hogwarts'? a social media user asked as videos of the Hogwarts like caste as seen in the distant sky went viral in China. 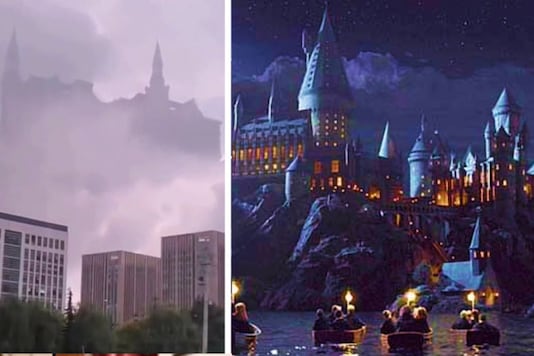 'Is this the Shandong branch of Hogwarts'? a social media user asked as videos of the Hogwarts like caste as seen in the distant sky went viral in China. Trending Desk Last Updated: September 13, 2020, 11:04 AM IST FOLLOW US ON:

For all Potterheads, it is a dream come true to come face to face with a Hogwarts style castle. Apparently, footage of something like this has appeared on Chinese social media.

According to a report published in The Daily Mail, a Hogwarts like castle was spotted in China’s Shandong Province. If the local media reports quoted by the news portal are to be believed then this is a natural phenomenon called a mirage.

The video of this incident was recorded at 11 am in Jinan. The said place is the capital of Shandong Province. The clip was shared on Chinese microblogging site Weibo. People on the portal compared the structure with the Hogwarts castle in the Harry Potter series. Some users of the portal also joked about it.

One person wrote: 'Is this the Shandong branch of Hogwarts? 'Another fan jokes: 'How can muggles see Hogwarts? 'A third viewer commented: 'Has Hogwarts finally come to China to recruit students?'

This phenomenon usually occurs when moisture in the air becomes warmer than the temperature of the water below. So, when sun rays from the colder air into the warmer air, it gets refracted. This thereby leads to the creation of reflection in the air.

Normally, the patterns in such cases are blurred and shimmering with some sort of familiarity in comparison to human structures.

For the unversed, Harry Potter is a series of seven fantasy novels that have been written by British author J. K. Rowling. The series revolves around the lives of a wizard, named Harry Potter and his friends Hermione Granger and Ron Weasley. The three of them are students at Hogwarts School of Witchcraft and Wizardry. The majority of the series is basically about Harry’s struggle against Lord Voldemort, who is basically a dark wizard who intends to become immortal.