Hanifa's Anifa Mvuemba Couldn't Get the Fashion Industry's Support. Turns Out She Didn't Need It

Here at Fashionista, we're passionate about covering all the ways that the industry is changing for the better. That's why we wanted to honor the forces working tirelessly to reshape what it means to work in fashion and beauty. With our annual series, Fashionista Five, we'll be doing just that by ...Continue reading

Here at Fashionista, we're passionate about covering all the ways that the industry is changing for the better. That's why we wanted to honor the forces working tirelessly to reshape what it means to work in fashion and beauty. With our annual series, Fashionista Five, we'll be doing just that by highlighting (you guessed it) five people whose work we've admired over the past year.

Designers have been spending the past few weeks and months scrambling to figure out if and how they would present their Spring 2021 collections next week, but they already have at least one example of what an engaging, buzzy digital show could look like.

On May 22, in the midst of a pandemic that had already begun impairing (to put it lightly) much of the fashion industry, the womenswear brand Hanifa presented a groundbreaking digital fashion show via Instagram Live. Rather than simply shooting a model wearing each look, designer Anifa Mvuemba used 3-D animation to make it look as if there were — in the least creepy way possible — ghosts storming down the runway in her elegant, figure-hugging creations. And not just any ghosts. These ghosts had curves, and certain attitude to their walk that felt real and familiar, without distracting the viewer from the clothes themselves.

Titled Pink Label Congo, the collection features sexy-yet-sophisticated and sometimes downright regal pieces clearly designed to make the women who wear them feel like their best, most powerful selves. Mvuemba positioned the collection as an homage to the Democratic Republic of the Congo, where her parents are from (and where she had planned to visit this year before coronavirus hit). She wanted to convey the beauty and hope of the Congolese spirit while shedding light on the African country's problems, including the use of child labor in local mines.

The genuinely mesmerizing and innovative show and its ensuing buzz made headlines everywhere from Teen Vogue (which had selected Hanifa for a designer mentorship program a year prior) to the New York Times, who called the brand's invisible avatar "a fashion model for the moment."

Despite the inherent challenges of managing a fashion brand during a pandemic, the momentum from that virtual show hasn't really let up for Hanifa in the months since. A mention on Beyoncé's directory of Black-owned brands, a September InStyle subscriber cover via Zendaya and a placement on Tracee Ellis Ross in Elle's The State of Black Beauty package are among the exciting moments that have followed. PR agency The Hinton Group (helmed by inaugural Fashionista Five subject Nate Hinton) also signed on to represent the brand shortly after the show.

"Hanifa is never going to be the same since the digital show and it's just been so much, so much positive, great things that came out of that and to even think that I was terrified of that in the beginning is so funny now," Mvuemba tells me via Zoom.

Indeed, that turning-point moment almost didn't happen. Mvuemba understandably wasn't sure staging a fashion show, even a digital one, made sense at that time.

"It started off really rocky, I think, for everyone," she says. "It was just scary time. I was terrified. I was like, wow, we're going to lose the business. I don't even want to post anything because the world is suffering. I was just thinking of the worst." Covid aside, she also just wasn't sure people would get it. "I don't know how it's going to be perceived," she was thinking. "Are people going to say this is corny? Is this weird? It was so many different things and I was like, 'No, Anifa, you just have to do it.'" 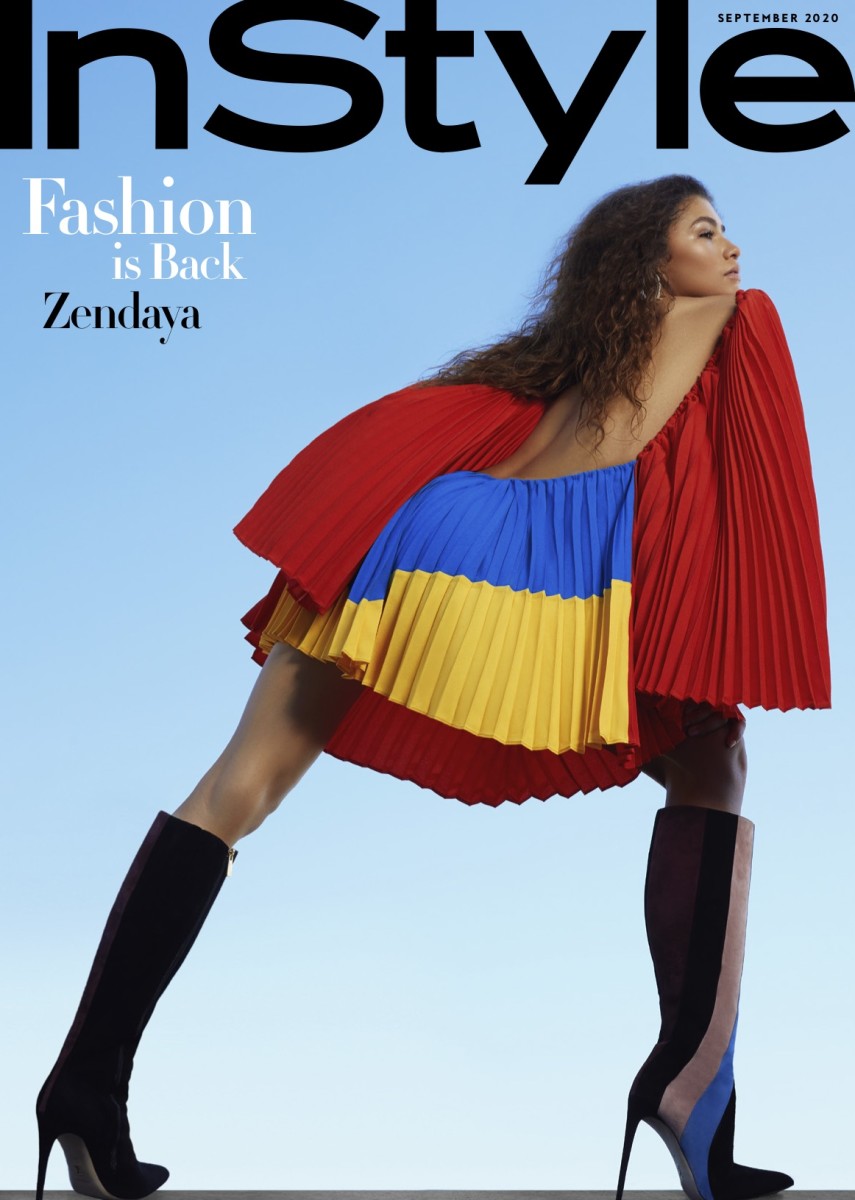 The show was not a reaction to the pandemic and ensuing shelter-in-place orders so much as it presented an opportunity for Mvuemba to move forward with something she'd been thinking about and toying around with for a while. Having always been interested in technology, Mvuemba started using CAD graphics in the brand's visuals and posting them to Instagram, and people responded.

"The conversion to sales was always good with those," she explains. "I've always wanted to figure out how to make them move, animate them, but I didn't know how."

With more time on her hands during lockdown, she began teaching herself different programs and ultimately hired animators to help execute her vision. The model's ghostliness was about helping women to see themselves in her clothes. Despite her fears about how it would all come across, it was now or never. "Everyone is home, everyone's on their phones. If we don't do it now, then we're never going to do it."

In other words, this "viral" moment wasn't a fluke: Mvuemba has been thinking outside the box and doing things on her own terms for years, often out of necessity. In an industry where designers rarely "make it" without a helping hand of some sort — whether it's a wealthy benefactor, a powerful connection or simply the privilege of being able to get a foot in the door via an unpaid internship or an elite New York fashion school — Mvuemba has gotten here all on her own.

Related Articles
Zendaya Wears All Black Designers on the September 2020 Cover of 'InStyle'
Nate Hinton Is Not Just a Publicist, He's a Champion of Your Favorite Emerging Designers
100+ Black-Owned Fashion Brands to Know

Born in Nairobi, Kenya to Congolese parents, Mvuemba and her family fled to the United States when she was three years old to escape war and start a new life. Her first introduction to fashion was through her mother.

"I admired her so much," she says. "She worked so hard when we were kids and the days where she didn't work, just seeing how she would get up in the morning, put on her outfit and how she cared about her garments and how she took care of them in her coat closet, her jewelry... That kind of led me to start sketching and then my interest grew from that."

Although she grew up wanting to be a teacher, Mvuemba took a fashion design course during her junior year in high school and began working retail after she graduated — an invaluable experience for anyone wanting to work in fashion. "It felt like you were running your own business," she says. "It's almost like if you didn't sell, you didn't really make money. I think that was really cool. I really enjoyed that part of the job."

Since that high school design class, she aspired to attend fashion school in New York, but her parents were of the "doctor or lawyer" persuasion. "I remember running home and talking to my parents about it and my dad was just like, 'No, that's not going to make no money. You're African.'" 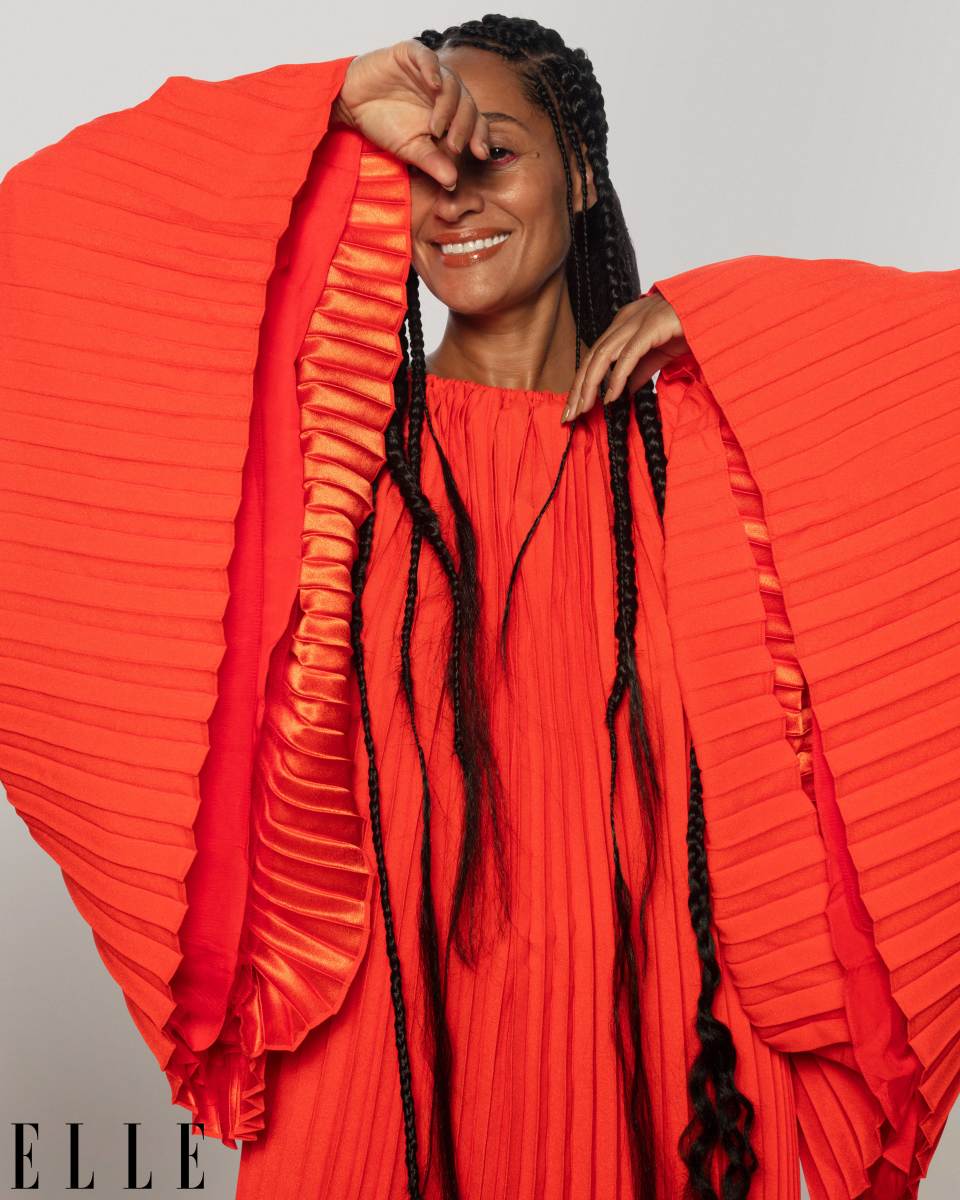 Tracee Ellis Ross in Hanifa, styled by Shiona Turini for Elle's The State of Black Beauty

Mvuemba did ultimately start studying fashion merchandising at the state school she attended in Maryland, but it wasn't a fit. She ended up dropping out and then quitting her job at Nordstrom shortly thereafter, experiencing a relatable rough transition into adulthood. "It was just a very, very tough period in my life at that time," she says.

Still, she had one event to look forward to: her 21st birthday. Mvuemba used her limited sewing skills to make herself a dress to wear, which she posted to Instagram. The rest, as they say, was history. The 40-or-so likes and few comments were enough to give her the confidence to keep going, so she began making custom orders, teaching herself how to sew along the way.

Mvuemba never set out to align with industry buzzwords like body positivity and inclusivity, instead simply making clothes she and her friends wanted to wear. "When I would shop, I wouldn't really see myself, or I would have such a hard time finding things that fit me the way that I wanted them to," she remembers. As a brand, she also wanted to avoid being put in any sort of box.

"I definitely wanted this to be a brand that was reputable, that was recognized by the fashion industry. And I also did not want to have the label of an African designer. I wanted to be known as a designer designer," Mvuemba explains. As her business grew, through social media and word of mouth, primarily, she also started to notice the lack of representation of Black women in the industry. "I wanted to be able to contribute to some change in that area." That wasn't going to be easy.

"I felt there were no resources. This entire process, this entire journey has been me literally just winging everything," Mvuemba says. She would reach out to "quote-unquote resources" in the industry and never hear back.

Once Mvuemba stopped trying to fit into a homogeneous industry that unfortunately wasn't ready to embrace her, she quickly arrived at those milestones of success.

"It was this moment I had at the beginning of this year where I was just like, you know what, I have this great community of women that supports this brand. I've been able to accomplish so much on my own. I'm just going to continue to do my own thing," she says. "I think it's a cool way to just tell other designers like myself, emerging designers, that it's okay to step out of your comfort zone, and do what you feel is best for your brand."

While she also once had traditional aspirations to move to New York, she's now happy to stay in Maryland near Washington, D.C., avoiding the city's exorbitant living costs, which would have made building her brand even more difficult. In lieu of opening a showroom and doing wholesale, Mvuemba focuses on her own growing customer base.

"I really pay attention to what their needs are and the community of the women that support me and have supported me from the beginning," she says. She still has goals, of course: a showroom in D.C., expansion into tech, beauty and bridal. She's also working on a shapewear line. Rihanna, Michelle Obama and Beyoncé top her list of celebrities she'd like to dress. She also wants to help mentor other designers, providing them with the guidance she never had.

Hanifa has seen a lift in sales over the summer, since the Black Lives Matter movement picked up steam, she says, and Mvuemba hopes it signifies a permanent shift in consumer spending towards Black-owned businesses, and an easier path to success for designers than the one she's been on since her 21st birthday. She'll be 30 this year, and only recently has Hanifa been getting the recognition it deserves. The best is yet to come — for Mvuemba and, hopefully, the designers who follow in her footsteps..