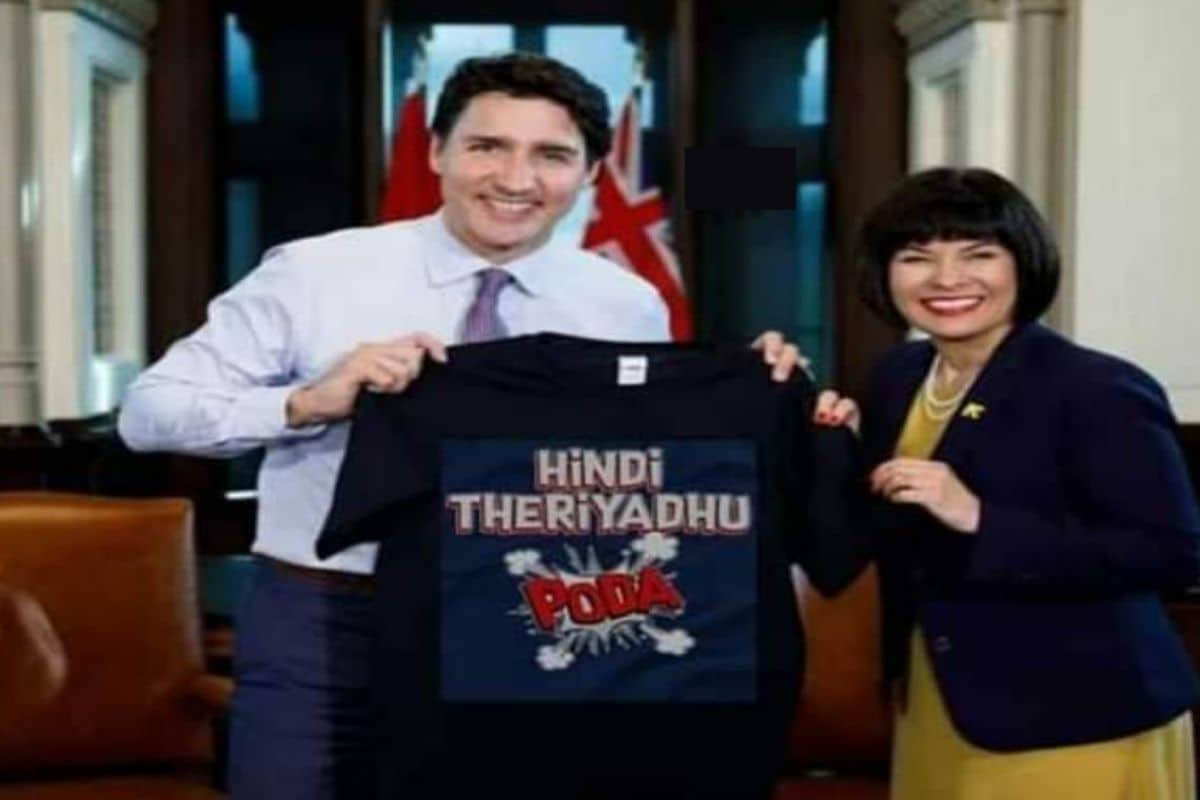 A photoshopped image of Canadian Prime Minister Justin Trudeau holding a T-shirt with "Hindi theriyathu poda (I don’t know Hindi, Go!)" written on it has gone viral on social media. This comes amid the raging debate in the country regarding the imposition of the Hindi language between Hindi speaking and non-Hindi speaking states in India.

For those unaware, here's some context.

A few weeks ago, Lok Sabha MP Kanimozhi Karunanidhi, daughter of the late M Karunanidhi, tweeted about how she had been treated at the airport in Chennai.

Kanimozhi accused the Central Industrial Security Force (CISF) for questioning her "nationality" because she could not understand Hindi. This kickstarted a debate on whether being an Indian national meant that one would have to necessarily understand and speak Hindi.

"Today at the airport a CISF officer asked me if 'I am anIndian,' when I asked her to speak to me in tamil or English as I did not know Hindi. I would like to know from when being indian is equal to knowing Hindi. #hindiimposition," Kanimozhi had tweeted then.

In solidarity with Kanimozhi, non-Hindi speakers started posting photos where they can be seen wearing T-shirts that say ‘I am Indian, I don’t speak Hindi.’ The idea is to suggest that you can be an Indian without having to know the Hindi language.

The hashtag that accompanied most of these pictures was #HindiTheriyathuPoda, which means, ‘Don’t know Hindi.’

READ: #HindiTheriyathuPoda: T-shirts With Slogans Against Hindi Imposition are a Rage in Tamil Nadu

READ: Kanimozhi Faces 'Discrimination' After She Asked CISF Staff to Speak in English or Tamil

That is when the image of Trudeau holding the t-shirt began doing the rounds on social media. The post on Facebook, where it originally appeared, suggested that Trudeau too had backed the non-Hindi speaking states in their fight against Hindi imposition. The post, in Tamil, said that Trudeau could not remain silent and would stand by the Tamilians.

On reverse searching the image, it led us to a 2019 tweet by Trudeau which proves that the image has been morphed to include the slogan. The t-shirt originally read "Vaccines cause adults" and the photo was posted by the Prime Minister himself on My 30, 2019.

Another photo of Trudeau wearing the t-shirt was posted by Canadian MP Ginette Petitpas Taylor on May 31, 2019.

In fact, Justin Trudeau has always been extremely vocal on social media and during his campaigns about the importance of vaccines.