Former CBI chief M Nageswara Rao took to Twitter to call Swami Agnivesh an anti-Hindu in saffron clothes and said that his death was 'good riddance'. 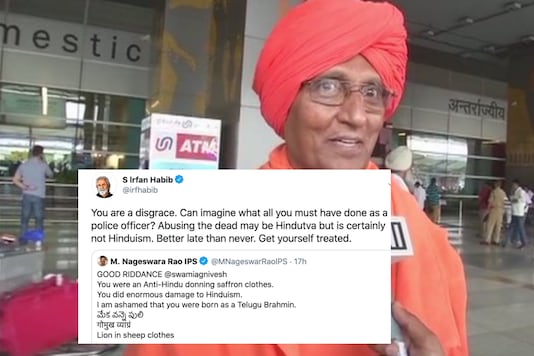 Former CBI chief M Nageswara Rao took to Twitter to call Swami Agnivesh an anti-Hindu in saffron clothes and said that his death was 'good riddance'.

Even as tributes and condolences poured in for social activist Swami Agnivesh, who passed away on Friday, a retired police officer has caused outrage by calling the renowned activist an "anti-Hindu in saffron robes" and referring to his death as "good riddance".

Taking to social media platform Twitter, IPS officer M Nageswara Rao mounted a scathing attack on Agnivesh, who was often under attack by Hindu extremists for his comments and beliefs.

"GOOD RIDDANCE @swamiagnivesh. You were an Anti-Hindu donning saffron clothes. You did enormous damage to Hinduism. I am ashamed that you were born as a Telugu Brahmin," Rao wrote while sharing the news of his death. He went on to call Agnivesh a "lion in sheep clothes" and added, "My grievance against Yamaraj is why did he wait this long!".

While Nageshwar is not a serving officer anymore, he has formerly served as the interim director of the Crime Branch of India for a short spell in 2019.

The insensitive comment comes just a day after the death of the renowned activist and former Haryana Education Minister, who passed away after due to liver cirrhosis in the Institute of Liver and Biliary Sciences in Delhi after being critically ill.

Rao's comment caused on outrage on social media with many calling out the serving IPS officer for his insensitivity, especially following the death of an esteemed public figure. Social activist and philanthropist Harsh Mander took to the microblogging to share his outrage.

Very sad to read this tweet by a serving police officer, flaunting such uncivility & communal bias re Swami Agnivesh, a man far taller & better than he will ever be, just after his passing. That he feels he can display his bigotry so brazenly reflects on those who lead the nation https://t.co/5Xcar3yYFj

"Very sad to read this tweet by a serving police officer, flaunting such uncivility & communal bias re Swami Agnivesh, a man far taller & better than he will ever be, just after his passing. That he feels he can display his bigotry so brazenly reflects on those who lead the nation," Mander wrote.

Rao comments also earned flak from other IPS officers such as RK Vij who called Rao's tweet and "sad" and an "insult" to human life.

The former CBI interim-chief was even called out by the Police Foundation of India, an independent think-tank that serves as a forum for serving and retired police officers. Historian Irfan Habib also responded to the tweet.

Tweeting such hate messages by a retired officer posing as an IPS officer - he has desecrated the police uniform which he wore and embarrassed the government. He demoralises the entire police force in the country, especially the young officers. https://t.co/qOiI8D6dkO

You are a disgrace. Can imagine what all you must have done as a police officer? Abusing the dead may be Hindutva but is certainly not Hinduism. Better late than never. Get yourself treated. https://t.co/Shh4zlmduc

It's worrisome to see a retd IPS officer spewing so much hate. I am no fan of the deceased nor do I hold any great impression about him. But this hate filled tweet is highly subjective. Aren't cops supposed to be objective in their approach towards others?

A true hindu is about being a good human being. If you were any of it, you wouldn't speak ill of the dead. Hindutva radicals are although a pro on it. They are the ones that are described in Kalyug!

A defiant Rao, however, doubled down on his previous tweet bt tweeting, "Correction: Read "Wolf" for "Lion" in the above tweet".

Correction: Read "Wolf" for "Lion" in the above tweet.

Swami Agnivesh was at forefront of social reform and against oppressive government regimes ever since 1977 when he resigned from the post of Haryana education minister after the state government's inaction against police who opened fire on protesting bonded labour.

More recently, Agnivesh came under attack from the right-wing after and was even allegedly attacked by the BJP's youth wing in Jharkhand in 2018 after he said that the ice stalagmite statue inside Amarnath was just an ordinary formation that held no special religious significance. Many at the time had accused the Arya Samaji reformer of being anti-Hindu and insulting Lord Shiva.

Swami Agnivesh was once again attacked in Delhi a month later.