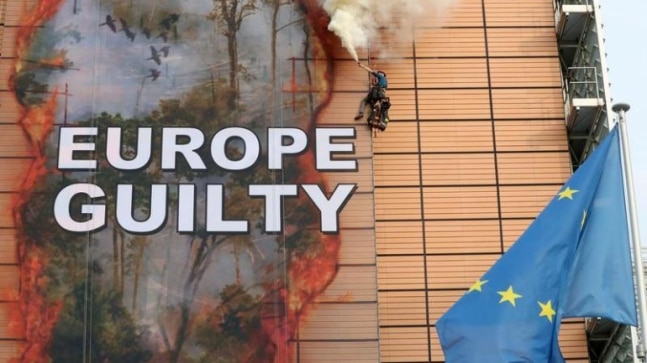 The European Commission will propose that the European Union sets a 2030 target of cutting its net greenhouse gas emissions by 'at least 55%' against 1990 levels, according to an internal document seen by Reuters.

A Greenpeace activist releases smoke after rolling down a banner outside the European Union headquarters to protest against the ongoing damage to the Amazon rain forest, in Brussels, Belgium, on Friday. (Photo: Reuters)

The European Commission will propose that the European Union sets a 2030 target of cutting its net greenhouse gas emissions by “at least 55%” against 1990 levels, according to an internal document seen by Reuters.

Already well on the way to meeting its current climate target of a 40% cut by 2030, the EU wants to set a more ambitious near-term target in order to achieve its flagship goal of net zero emissions by 2050 and cement its status as a global leader in efforts to curb catastrophic climate change.

The document, which could still be amended further before publication, says the Commission will propose a target for the EU’s net emissions in 2030 to be at least 55% below 1990 levels.

The EU executive, asked about the new target, said it did not comment on leaked documents.

It will propose the new 2030 climate target next week. The goal needs the approval of national governments and the European Parliament who are split over how ambitious it should be.

A “net” emissions target can be achieved both by cutting greenhouse gas output from sectors such as industry and power generation, and using forests or carbon capture technologies to remove emissions from the atmosphere.

The EU’s 2050 ‘net zero’ goal means that, by that date, most sectors would have slashed their greenhouse gas output to near zero, and emissions removals would be used to balance out any remaining emissions production.

Researchers and climate campaigners have said that in the near term, using emissions removals to meet targets should be a last resort, and the priority should be to stop producing planet-warming gases in the first place.

“Due to questions of permanence and accounting, avoiding emissions is better for the climate than removing carbon,” German think-tank Agora Energiewende said in a report last month.

Greenpeace policy adviser Sebastian Mang said using removals would be an “accounting trick” that could make the goal sound more ambitious than it actually is.