Down from 125 days to 60: PM Modi says speed of building PMAY houses improved during coronavirus pandemic 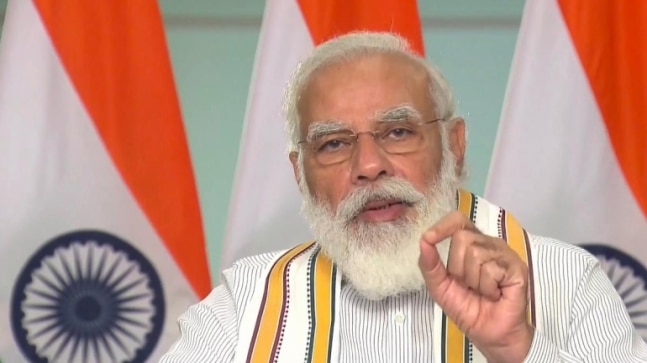 The average time of building a house under the Pradhan Mantri Awas Yojana (PMAY-Gramin) came down to 45 to 60 days during the pandemic from 125 days -- Prime Minister Narendra Modi said on Saturday.

PM Modi was speaking at the virtual housewarming ceremony of 1.75 houses built in rural parts of Madhya Pradesh under the PMAY scheme.

"The speed with which these houses were constructed is a record. The construction of a house under the PMAY used to take an average of 125 days earlier. But in the coronavirus period, the average time taken for it came down to 45 to 60 days. This is an example of turning a crisis into an opportunity," he said.

PM Modi said under the PMAY, 18 lakh houses have been constructed in India during the coronavirus period.

"This has become possible as the migrants who returned home during the coronavirus-induced lockdown also joined the work and availed benefits of the Garib Kalyan Rojgar Abhiyaan, under which Rs 23,000 crore have been spent on infrastructure and other works," PM Modi further said.

PM Modi also called for the need to strengthen the poor in order to end poverty.

"This campaign has helped the rural economy," PM Modi said.

On the occasion, PM Modi interacted with some of the beneficiaries of the project. While interacting with Pyarelal Yadav from Singrauli, Modi said, "For removing poverty, it is important to strengthen the poor and this scheme has developed self-confidence in them so that they can sleep peacefully in their house at the end of the day after toiling hard."

Son of Gulab Singh from Dhar district's Amjhera village told Modi that he constructed his house with the collective efforts of his villagers, who contributed voluntarily for it.

The masons and laboureres, who were rendered jobless due to lockdown, worked for them free of cost, he said.

When Narendra Namdeo of Bhitarwar in Gwalior district praised the PM for his government's decision to nullify Article 370 and triple talaq, Modi asked him in a lighter vein whether he was planning to contest elections considering his knowledge about several issues.

Namdeo's wife thanked Modi for providing a house, a gas connection and a toilet to them and invited him to visit their home, which Modi accepted.