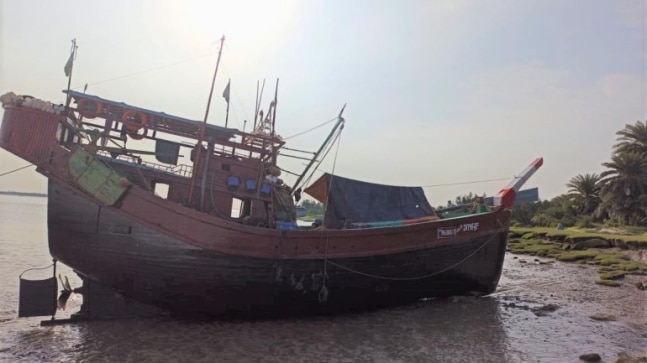 Smugglers had planned to cross over to Bangladesh using an illegal river route, Customs officials said adding that Indian Coast Guard and local police helped with the arrests.

Customs sleuths intercepted a fishing trawler minutes before the vessel was scheduled to cross over to Bangladesh on the intervening night of September 6 and September 7. The inquiry was initiated by officers associated with the Commissionerate of Customs (Preventive) West Bengal on the basis of specific intelligence.

The fishing trawler in question was coming from Diamond Harbour and headed towards Sagar Island. According to Customs officials, the crew had planned to cross over to Bangladesh using an unauthorised riverine route and channel.

Goods of Indian origin were also seized from the trawler.

The trawler had changed its route upon sight of Customs vessels and even attempted to escape but was intercepted near Geonkhali. Suspects aboard the trawler then abandoned the vessel in an attempt to evade arrest.

Six of them were arrested following a joint operation by the Indian Coast Guard and local police.

A search of the trawler led to the recovery of incriminating documents along with identity cards of certain Bangladeshi and Indian nationals. Mobile phones with Bangladeshi SIM cards and personal effects, all made in Bangladesh, were also seized.

The trawler also had flags of Bangladesh and it appears that the same would have been displayed after it had illegally crossed the International border.

Persons onboard the trawler were smuggling sarees and other garments collectively worth Rs 3.3 crore concealed in about 400 gunny bags.

During interrogation, the crew members confirmed that the trawler was scheduled to cross over to Bangladesh through an unauthorised route with an intention to smuggle Indian goods to Bangladesh.