The viral video of the crocodile was shared on Facebook by an Australian named Alec Dunn, who was out in the sea checking for crab pots along with a friend. 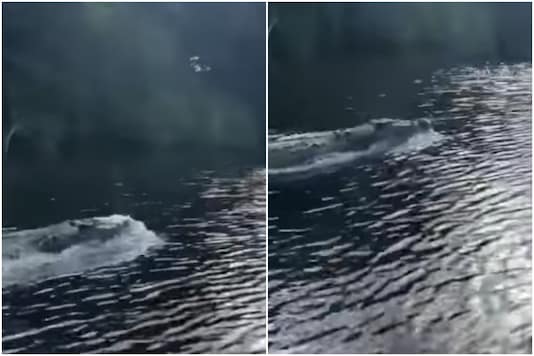 A crocodile was seen racing with a speedboat in Australia | Image credit: Twitter

The viral video of the crocodile was shared on Facebook by an Australian named Alec Dunn, who was out in the sea checking for crab pots along with a friend. Trending Desk Last Updated: September 12, 2020, 6:36 PM IST FOLLOW US ON:

Videos of animals are known to be quite popular on the internet. Among the latest ones to garner the attention of social media, users involve an enormous crocodile racing against a speedboat.

The 13-second clip shot in Australia shows a fully grown reptile breezing through the seawater at an astonishing speed in parallel with the boat. The video shows how swift the reptile can be in water bodies.

It was shot by an Australian named Alec Dunn, who was out in the sea checking for crab pots along with a friend. Dunn shared the clip on Facebook and has since gone viral.

The clip shows the giant crocodile emerging out of the water all of a sudden and moving aggressively not far away from the boat. The post drew thousands of comments.

Many seem to draw lessons from the video about venturing into the water. One Facebook user commented, ““This is the best example: Why I don't swim, boat, jet ski, fish, skip rocks in their territory, it's all for them.” The man has a point, it is the territory of the crocodiles.

Another comment read: “What an amazing creature, crazy how quick a big fella like that can move! I love Crocs, last of the dinosaurs and still going strong”. The person was indeed right in comparing the seawater crocodile to dinosaurs. It has scientifically established that crocodiles are more closely related to dinosaurs than other reptiles.

A seawater crocodile can grow up to seven metres in length and can weigh up to 1000 kg. Equipped with an extraordinary night vision, these predators usually hunt at night. While they are strong hunters in water, they are comfortable on land too. They are usually found throughout the tropical regions of Africa, Asia, North and South America and, of course, Australia, where this beast in the video was sighted.