Many shop owners lament that they aren’t doing more than 10 per cent of the average sales of what they did during this season last year.

First, it was the sealing drive and then, the coronavirus pandemic — the shop owners at South Delhi’s posh Defence Colony market, who normally do brisk business during the festive season, are facing the double whammy this year.

Their business has been adversely impacted by the Covid-19 situation and according to the traders, even though the footfall has improved, as people are slowly stepping out of their houses, they are abstaining from buying expensive products.

Many shop owners lament that they aren’t doing more than 10 per cent of the average sales of what they did during this season last year.

“The garment and gift shops here usually run out of stock by this time because of the festive rush. But this year, we are not even seeing 10 per cent of the sale which is a big concern. In addition to this, the sealing, for the last two years, has rendered scores of shop owners and labourers without work.

The market is not expected to see a revival till mid next year,” says Rajinder Malik, president of the Defence Colony Market Association.

Defence Colony market is not alone which has borne the brunt of the pandemic.

Although people have started coming out of their home after the Covid-19 lockdown was lifted, the festive zeal remains missing at several big and small markets across the city.

Shopkeepers have rued that the festive sales have nearly halved since the past few years, despite many discounts offered on products. Shopkeepers and volunteers can be seen enforcing social distancing norms across marketplaces, where people have started gathering of late.

The Covid-19 and social distancing norms have largely kept away shoppers from markets till now.

However, with still two weeks left for Diwali, shop owners are hopeful that a good festive sale to tide over the losses which their businesses have suffered since the past few months.

“Our sale has hit a roadblock. Several private companies have either laid off their employees or cut their salaries. The customers don’t want to spend money on expensive items. The market is not picking up the pace as it was supposed to despite the restrictions being lifted almost two months ago,” says Mahinder Aggarwal, president of the Nehru Place Market Association. Nehru Place is the country’s largest electronics market.

According to Aggarwal, around this time of the year, the market sees a massive rush as people prefer to buy gadgets as festive gifts. He, however, says Nehru Place will soon put up bumper sale offers to attract more customers.

“We will start the offers by the end of October, keeping in mind Diwali and Christmas and New Year. This is the only time of the year when the shop owners launch a huge clearance sale with major reductions across a range of electronic items,” adds Aggarwal. 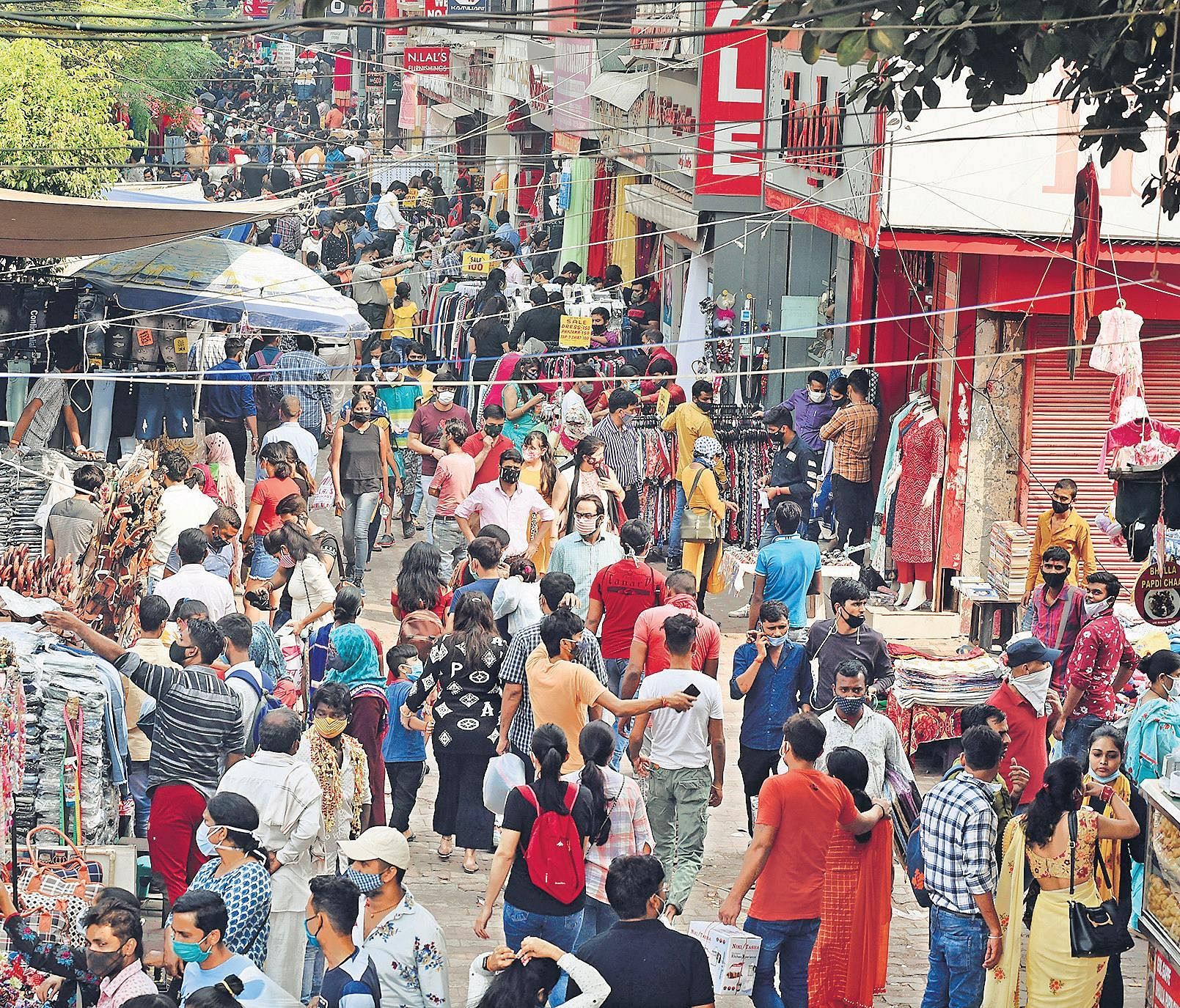 Customers not buying much

The Delhi government had allowed markets in the city to re-open from June 1, announcing that they would no longer be bound by odd-even restrictions as the country had entered the lockdown 5.0 or unlock phase-I.

However according to traders, the situation has not changed much as people might be coming out of their houses, but they are staying away from buying expensive products.

Earlier this month, Chief Minister Arvind Kejriwal gave the nod for cinema halls to be opened in the national capital from October 15.

According to the standard operating procedure (SOP), only 50 per cent seating will be allowed in cinema halls and alternate seats will be left vacant to maintain social distancing. Besides, face masks are mandatory inside the cinema halls.

“Navratri and Dussehra are over but the footfall is still very weak. We aren’t doing more than 45 to 50 per cent of the average sales of what we did during this season. There are many factors behind the market slump.

People do not have the same purchasing power. Their budgets are limited and they are only buying essential items. Also, festival sales is one of the most significant times of the year for e-commerce firms cwhen they witness the maximum sales figures and they are trying to capitalise on the same during this crisis. Most customers, fearing the spread of the Covid-19 infection, are not ordering online rather than venture out to buy from retail stores,” says Sanjeev Mehra, president of the Khan Market Traders’ Association.

One of Delhi’s most expensive and posh markets, Khan Market is a great place to shop, as long as the customer is willing to shell out big bucks.

“The big gifts stores in the market are not seeing many sales. There are hardly any buyers for expensive garments and shoes,” adds Mehra.

Nitish, a frequent visitor to the Saket market in South Delhi, says the number of people visiting the place has increased in the last few days, but not many are buying costly items due to budget constraints.

As winter sets in over the capital, the preferred time to get married across the plains of north India, the packed streets of the historic Old Delhi market get a little more crowded with brides-to-be thronging shops to find the right ‘lehenga’ for their big day.

The Chandni Chowk and its adjoining areas such as Sadar Bazar are seeing a better situation.

“In Chandni Chowk, wedding-related business is picking up. But, people are not going for bigger purchases as compared to previous years. I don’t see the situation will improve until there is a vaccine available in the market,” says Sanjay Bhargav, president of the Chandni Chowk Traders’ Association.

This month, Kejriwal also announced that all weekly markets will be opened for the public to buy their daily essentials.

It is to be noted that only two markets were allowed to be opened per zone due to the pandemic. But the issue remained a bone of contention between the Kejriwal government and the Opposition BJP till recently.

The chief minister on many occasions has claimed that it was due to his efforts that the markets were finally allowed re-open, but the BJP claims otherwise.

According to the party, there are around 2,700 weekly markets in the city. These markets were shut in the last week of March following the announcement of nationwide lockdown.

The Delhi Disaster Management Authority had allowed to re-open them in August on a trial basis till September 30. Later, when all the weekly markets were allowed to open, the AAP government claimed the credit and proposed their global makeover to develop them as a popular tourist spot.

The Covid-19 and social distancing norms have largely kept away shoppers from markets till now. Most consumers say they want to buy small traditional items and gift packs online instead of going to market.

Sweetshop owners awaiting the boost to their sales in too got the setback.

“We are incurring a loss because the expenses are the same, but sales are very low,” a sweetshop owner at the Bengali market.

Even though the footfall has improved at city markets after lockdown restrictions were lifted, shopkeepers lament that the festive sales have nearly halved compared to the past few years as buyers are abstaining from purchasing expensive products due to budget constrains, reports Siddhanta Mishra.

This article has been aggregated from www.newindianexpress.com and they maybe/are the copyright owners of the same. If you are the Author/Copyright owner of this article and want us to remove the same then send an email to admin@southdelhi.news so that we can delete it immediately. We sincerely regret and apologies for any inconvenience caused to you due to the same. Though it is your decision but please take note that the link to your website and the article have been given above, within and on the bottom of the article.