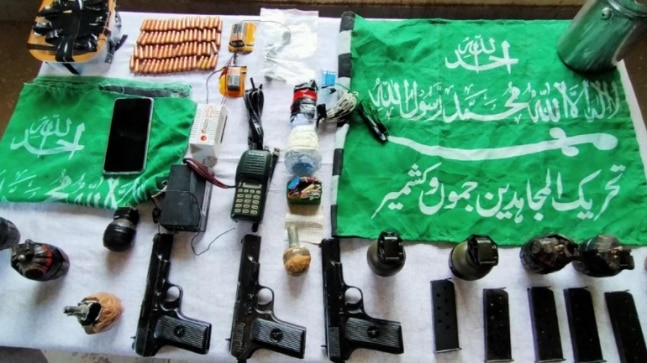 Two persons were apprehended during this joint operation by Army, SOG-Jammu and local police in J&K's Poonch.

The Army along with Mendhar police and Special Operations Group (SOG) Jammu intercepted a courier of arms, ammunition and explosives along with other subversive material. The joint operation that led to the seizure was carried out on the basis of a specific input.

Special Forces (SF) parties were deputed to intercept this consignment of arms and explosives meant to be used for subversive activities. The material was scheduled to be carried from forward areas near the Line of Control (LoC) to the hinterland before it was intercepted.

Arms, explosives seized during the joint operation in J&K's Poonch.

As per the latest input, two accused have been apprehended. Arms were also recovered from them during the arrests.

The Jammu and Kashmir Police have registered an FIR in connection with this case under Section 217 of the Unlawful Activity Prevention Act (UAPA) at Mendher police station.