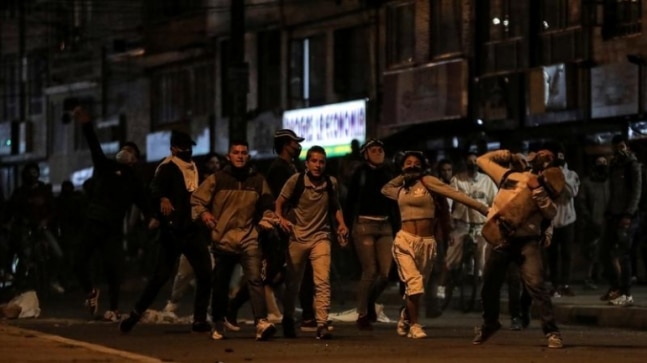 Colombia’s defence minister apologized on Friday on behalf of the national police for an incident of police brutality that sparked two nights of protests that rocked parts of capital Bogota and satellite city Soacha, leaving 11 dead and hundreds injured.

Demonstrators have taken to the streets for consecutive nights to protest the death on Wednesday of Javier Ordonez, 46. A widely-shared video filmed by Ordonez’s friend showed the father of two being repeatedly shocked with a stun gun by police. He died later in a hospital.

“The national police apologize for any violation of the law or ignorance of regulations by any members of the institution”, defence minister, Carlos Holmes Trujillo, said in a video message.

The video of Ordonez shows him pinned to the ground by police officers and subjected to successive electric shocks early on Wednesday as he begs, “please, no more.”

Police said Ordonez was found drinking alcohol in the street with friends in violation of coronavirus distancing rules. He was taken to a police station in western Bogota which has become a focal point of protests, and later died in hospital.

Two police officers implicated in Ordonez’s death face charges of abusing authority and homicide. They have already been suspended and will be fired from the force.

A further five officers have been suspended in connection with Ordonez’s death, Trujillo said.

Seven people aged between 17 and 27 years old died after being shot in Bogota during protests on Wednesday, according to the mayor’s office, while the national government says three were killed the same night in Soacha.

Family members of some of the Bogota victims told local media their loved ones had not been participating in the protests.

Another woman was killed in Bogota on Thursday as protests continued. She was hit by a stolen public transport vehicle, local and national officials said.

More than 200 civilians and 194 police officers have been injured during the clashes, according to the national government.

Ordonez’s death could fuel renewed outrage against the police, who were widely criticized last year after a teenage protester was fatally injured by a riot squad projectile.