Taking note of the untoward incident, Musée d’Orsay itself took to Twitter and apologised to Jeanne, a French literature student who was stopped from entering the museum due to her low cut dress. 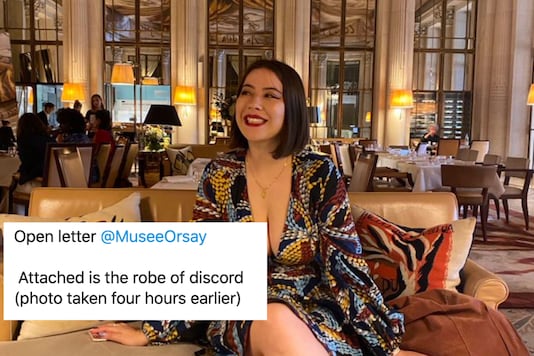 Taking note of the untoward incident, Musée d’Orsay itself took to Twitter and apologised to Jeanne, a French literature student who was stopped from entering the museum due to her low cut dress. News18.com Last Updated: September 12, 2020, 2:07 PM IST FOLLOW US ON:

France's Musée d’Orsay recently came under fire from feminists after a woman shared an open letter to the museum, slamming it for denying her entry because of her "low cut dress".

In an open letter shared on Instagram, a French woman by the name of Jeanne called out the prestigious French institution's "double standards" after she accused a staff member working at the museum of denying her entry because her dress was too revealing.

Jeanne, a student of French literature, took to Twitter to share a copy of the letter along with a photo of herself from the day she was denied entry. "Attached is the robe of discord, she wrote white sharing the photos.

"Arriving at the entrance of the museum, I don't have time to take out my ticket before the sight of my breasts and my appearance shocks an officer in charge of reservations," Jeanne wrote in the letter.

"At this moment, I am still unaware of the fact that my cleavage has become the subject of this controversy." Jeanne was later told by security that she could not enter as she had broken the museum's rules.

An infuriated Jeanne further added in the letter, "I’m not just my breasts, I’m not just a body, your double standards shouldn’t be an obstacle to my right of access to culture and knowledge".

Jeanne, who had been making the trip to the museum along with a friend, said that ultimately, she was forced to put her jacket on and they were allowed to enter.

"I do not want to put on my jacket because I feel beaten, obliged, I am ashamed, I have the impression that everyone is looking at my breasts," Jeanne adds in the letter.

Accusing the museum staff of "discriminating on the basis of cleavage", Jeanne said that she questions the "coherence with which the representatives of a national museum can prohibit access to knowledge and culture on the basis of an arbitrary judgment determining if the appearance of someone is decent".

The incident has caused a hue and cry on social media with many attacking the museum for its apparent sexism. Many pointed out the hypocrisy of policing a woman's dress while entering a museum that itself is full of paintings depicting nude or topless women.

Taking note of the untoward incident, Musée d’Orsay itself took to Twitter and apologised to Jeanne.

"We deeply regret it and apologise to the person involved, with whom we are getting in touch," the museum tweeted from its official handle.