Canadian Journalist Gets Hit by Sprinklers While Reporting on Live TV, Her Reaction is Priceless

Global News reporter Shelley Steeves’ epic reaction to the hilarious situation was captured in a clip. 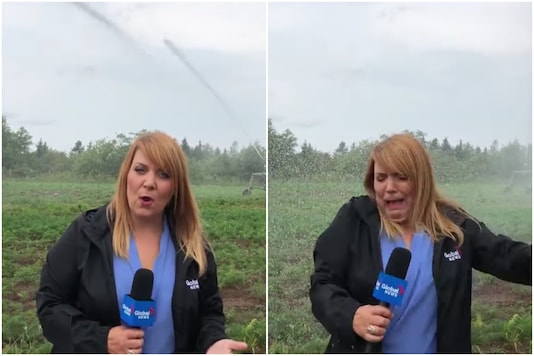 A Canadian reporter was hit by a sprinkler while on live TV | Image credit: Twitter

A Canadian television journalist was caught on cam being showered by water sprinklers. Being a reporting newscaster is not a cakewalk as it requires the person to be on toes always. The correspondent in context was doing live reporting when out of nowhere sprinklers started going off behind her.

She was covering the story from a field and at a distance, sprinklers were on. Much to her surprise, while she was busy narrating an incident on the camera, the sprinklers had come full circle to give her a nice shower. Who could have seen that coming?

Global News reporter Shelley Steeves’ epic reaction to the hilarious situation was captured in a clip. The footage was posted by the broadcast channel on Facebook, along with a caption that reads, “A reminder from Global News New Brunswick’s Shelley Steeves that reporters should always be aware of their surroundings.”

The video has one viral since made available online, leaving many amused. It is a must watch for those looking for a good laugh or two. The recording has been doing rounds on social media platforms and the viewers are left in splits.

More than 300 people have hit the like button and others have also expressed their reactions in comments. Many users of the site have reshared the hilarious video, which is gaining popularity quickly.

There are also a few people who suggested that at least the camera person should have warned the reporter in time.

A user wrote, "I hope that’s water and not a manure spreader."

"Is the videographer just standing there, grinning, waiting for the spray to hit them both?” expressed a second. Another said, "I think this gets funnier every time I see it. I love your reaction."