A look at all the times that gender reveal party didn't pan out quite like the way some expecting parents had planned. 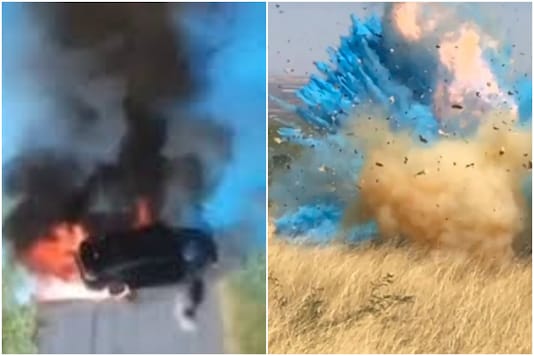 Gender reveal parties have often led to fires and accidents in the past | Image credit: Twitter

A look at all the times that gender reveal party didn't pan out quite like the way some expecting parents had planned. News18.com Last Updated: September 10, 2020, 12:30 PM IST FOLLOW US ON:

Trust Millennials to start fires out of nothing.

While gender reveal parties can be a fun way for soon-to-be parents to break the ice over the baby announcements, many expecting Millenials have recently gone so overboard with such celebrations that the result has not just been party overkill but posed a potential danger to life and property.

Take the recent case of a wildfire in California, United States, that recently burnt through 10,000 acres of land. The fire started on Saturday after the fireworks from a pyrotechnic device at one such party went out of hand.

In April 2017, a wildfire razed through 47,000 acres of land in Arizona. The land was owned by the state of Arizona as well as residents. The fire was started at a gender-reveal party in a desert near Green Valley, Arizona, south of Tucson. In a video that was later released by the US Forest Service showed a man shooting up a makeshift target with the words boy or girl on it. As soon as the man manages to shoot the target, it erupts in into a blue cloud of smoke (indicating a boy). The fire caused damages of $8 million dollars. In September 2018, the man who shot the target, off-duty US Border Patrol agent Dennis Dickey, pleaded guilty to starting the wildfire.

Not just a fire hazard, gender reveal parties can be a full-blown safety hazard, depending on the type of party planned. In 2019, it resulted in a plane crash in Turkey, Texas. As part of the party, a plane's pilot dropped 350 gallons of pink water from the aircraft. The plane crashed moments after that, taking down the pilot and a co-passenger that was onboard the one-seater aircraft. No fatalities were reported in the crash.

Not long after the Texas crash, yet another gender reveal party went south in Iowa in October of the same year when a family ended up creating an inadvertent pipe-bomb to reveal the gender of the expected child. The explosion resulted in the death of a 56-year-old woman from the family itself. The incident occurred at a home in Iowa when the device - that was meant to shoot out a plume of coloured smoke to reveal the gender of the boy - exploded. The flying debris hit a woman and caused her death. Just a day after the death of the Iowa grandmother, another gender party caused a massive fire in nearby Waulkee, Iowa.

Not just in the US, gender reveal parties seem to be a growing trend in other continents as well, In April 2018, a gender reveal party in Queensland, Australia, led to a car catching fire. The would-be parents were trying to achieve a smoke-trick known as burnout in which the wheels of a stationary car are spun to create smoke. The trick went wrong and resulted in the car catching fire.

"Toxic masculinity is men thinking they need to explode something because simply enjoying a baby party is for sissies," Karvunidis wrote in a Facebook post. "Stop it. Stop having these stupid parties. For the love of God, stop burning things down to tell everyone about your kid's penis. No one cares but you," she wrote.

So the next time someone invites you to a gender reveal party, make sure to check all safety measures are properly in place tbefore participating, especially if you plan to take your kids.