Bunty Aur Babli 2: It's a wrap for Saif and Rani film 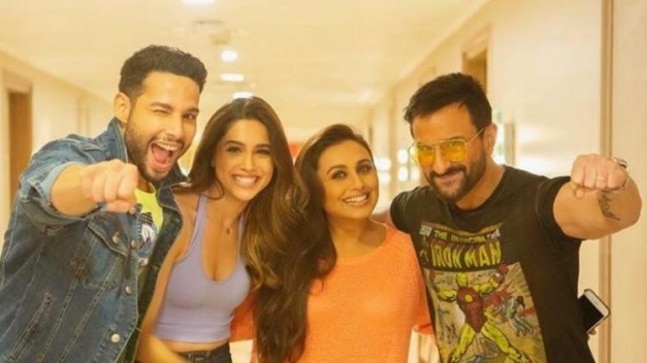 Saif Ali Khan, Rani Mukerji, Siddhant Chaturvedi and debutante Sharvari have wrapped up shooting for Bunty Aur Babli 2. The film, produced by Yash Raj Films, was slated to release in June this year. However, the film’s shoot had been stalled due to the novel coronavirus pandemic.

Sharing the news that the shooting of the film is now complete, Siddhant Chaturvedi wrote on Instagram, “Wrapped up #BuntyAurBabli2 with one last song. Grateful that the entire team made sure all safety measures were thoroughly implemented. #SaifAliKhan #RaniMukerji @sharvari @varun.v.sharma @buntyaurbabli2 @yrf (sic).” He also shared a photo of himself along with Sharvari, Saif Ali Khan and Rani Mukerji.

Sharvari, who is making her Bollywood debut with the film, also shared two photos with the Bunty Aur Babli 2 team on Instagram. “Wrapping up the shoot of #BuntyAurBabli2 with nothing but LOVE and one final song while maintaining all safety measures!#SaifAliKhan #RaniMukerji @siddhantchaturvedi @varun.v.sharma @buntyaurbabli2 @yrf (sic),” she captioned the first image.

Sharvari captioned the second picture as, “To the most special journey of my first film which was filled with love, laughter and learnings! Thank you team #BuntyAurBabli2 (sic).”

Bunty Aur Babli 2 is directed by Varun Sharma and is sequel to the 2005 super-hit film of the same name. The 2005 film had Abhishek Bachchan and Rani Mukerji in the lead roles.