The NEET examinees were directed to reach the exam centre three hours before the commencement of the test keeping in view the security and health checks. 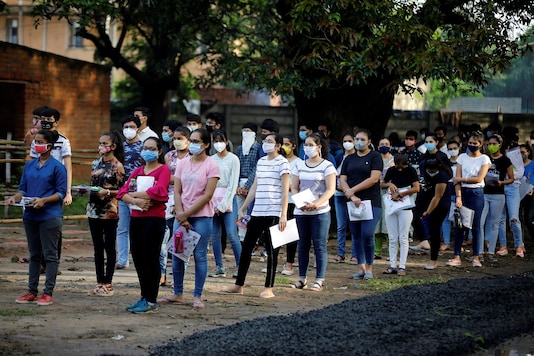 For representation: Students wearing protective face masks wait to enter an examination centre for Joint Entrance Examination (JEE), amidst the spread of the coronavirus disease (COVID-19).

The NEET examinees were directed to reach the exam centre three hours before the commencement of the test keeping in view the security and health checks. News18.com Last Updated: September 14, 2020, 2:07 PM IST FOLLOW US ON:

NEET aspirant Santosh Kumar Yadav of Bihar's Darbhanga covered a distance of 700 kilometers in 24 hours to reach Kolkata to write the exam. He changed two buses to appear for the exam for which he had been preparing for months. However, as fate had it, Yadav missed the test by a mere 10 minutes.

He was late by 10 minutes and was not allowed to enter the exam centre in Salt Lake, the Hindustan Times reported.

“I pleaded the authorities but they said I was late. The examination started at 2 pm. I reached the centre around 1.40 pm. The last deadline for entering the centre was 1.30 pm,” Yadav told a local television channel. “I lost a year,” he was quoted as saying.

The NEET examinees were directed to reach the exam centre three hours before the commencement of the test keeping in view the security and health checks amid the Covid-19 crisis.

Yadav said that he boarded a bus at Darbhanga at 8 am on Saturday to reach Muzaffarpur. From there, he took a bus to Patna. But a traffic jam on way to Patna caused him a delay of six hours. From Patna, Yadav took a bus to Kolkata at 9 pm and reached Sealdah station at 1.06 pm. He took a taxi to the exam centre, but missed the exam by 10 minutes.

The entrance exam in the middle of a raging pandemic in the country has been a matter of debate. Activists, students and leaders of the several political parties had opposed the exam fearing the safety of the students. Floods and lack of transport due to lockdown restrictions in several paces added to the woes of the students.

A few days ago, a 19-year-old girl from Madurai and two other medical aspirants in Tamil Nadu had committed suicide, prompting the opposition parties to demand the scrapping of the National Entrance-cum-Eligibility Test (NEET). On