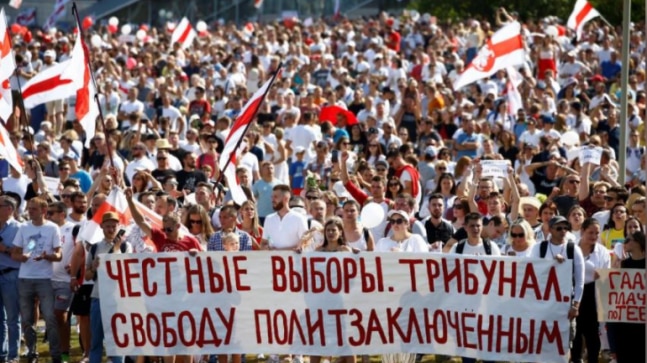 Lukashenko's visit will be the first to Soviet-era master Russia by the Belarusian leader since protests broke out over his disputed election win last month.

Putin has been keen to unify Russia and Belarus, and Moscow has accompanied its recent offers of military aid with calls for tighter integration.

Kremlin spokesman Dmitry Peskov said on Friday however there was no plan for the leaders to hold a news conference or sign any documents. The location of the "working visit" in Russia was yet to be announced, he said.
Lukashenko said last week that during his talks with Putin, he planned to "dot all the i's on issues that are very sensitive and delicate for the two states".

Lukashenko, who has been in power for 26 years, has vowed that he will not give up power to the opposition, which claims its candidate Svetlana Tikhanovskaya was the rightful winner of the August 9 polls.
She has taken shelter in EU member Lithuania after coming under official pressure.

Mounting Western pressure
There were fresh global expressions of worry and outrage on Friday.

UN Secretary General Antonio Guterres said he was "deeply concerned" over the use of force against peaceful protesters and also expressed worry over "the detention of people exercising their legitimate democratic rights."
The European Union, meanwhile, deplored "the increasingly open disregard for the rule of law in Belarus, in particular the escalation of violence and forced exile of members of the Coordination Council" opposition grouping.
"The EU reiterates its determination to impose sanctions on individuals responsible for violence, the repression of peaceful protests and the falsification of election results and is ready to take further restrictive measures as necessary," a statement said.

Lukashenko, 66, has had a volatile relationship with Moscow, playing it off against the European Union and ruling out an outright unification with Russia.

But with Western pressure against Lukashenko mounting, his options are now limited. Since mass demonstrations against him began he has sought support from Putin, with regular phone calls between the leaders.
Lukashenko has harshly cracked down on the protest movement with thousands detained, and those held in custody giving accounts of police violence and torture.

Putin has swiftly congratulated Lukashenko on his victory and raised the possibility of intervening militarily.
More than 100,000 people are estimated to have taken to the streets of the Belarusian capital Minsk over the past four weekends, and a new protest is planned for the coming weekend.

Historically, Russians and Belarusians have enjoyed good relations and members of the opposition say the protests movement is not aimed against Russia.

In an address to Russians this week, Tikhanovskaya said it was important not to allow politicians and propaganda trying to "poison" ties between the two peoples.

Belarus, an ex-Soviet state sandwiched between Russia and the European Union, has for years relied on Moscow for cheap oil and loans. The two countries have already formed a "union state" that links their economies and militaries but the Kremlin has been pushing for a closer integration.

Historic maps
In a symbolic gesture, the Russian ambassador to Minsk, Dmitry Mezentsev, on Thursday handed Lukashenko a gift of a book of historic maps depicting Belarus when it was part of the Russian Empire.

The opposition formed a Coordination Council to organise a peaceful handover of power but the Belarusian authorities have detained senior members and pressured them to leave the country.
One leading activist, Maria Kolesnikova, who is currently in jail in Minsk, issued a statement through lawyers saying security officers threatened to force her out of the country "alive or in pieces."
She said she ripped up her passport to resist forced expulsion but has been jailed on suspicion of making calls for actions "aimed at harming national security."