Are you wearing a stolen watch? Jofra Archer hits back at troller after getting racially abused 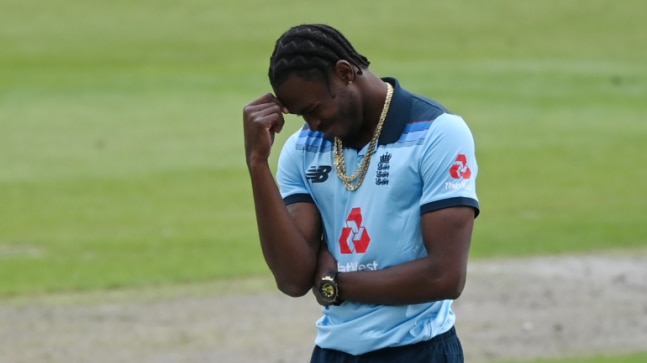 Barbados-born Archer has been dealing with racist abuse on social media ever since he made burst onto the international scene but things have got even worse for him after he was found guilty of breaking the quarantine rules during the England vs West Indies series.

However, Archer certainly knows how to give it back to the haters by exposing them publicly. Archer on Friday shared a screenshot of a message full of racial abuse sent to him on Instagram from a social media troll.

The troll tried to mock Archer about his jewelry and watch stating that he should stop wearing 'stolen' things. Archer is generally seen wearing neck chains, earrings, and watches.

Archer, who believes in giving back equally, took a screenshot of the message and asked all his fans to report the account for spreading hate. Archer wrote, "Hey guys can you help me to report this page please."

After seeing this, the social media troller quickly apologized to Archer saying he was drunk and upset with Australia's collapse against Archer in the opening ODI against England.

"Would like to send my full apologies with huge regret about some outrageous and ridiculous comments posted last night up late and drunk watching the cricket, mad at the Aussies collapse..no excusesdisgraceful behaviourapologies once again," the troller messaged Archer.

Archer went onto share the screenshot of the apology on his Instagram handle, saying that while drinking you think what you have been thinking all day. “If you are thinking that when you’re drunk you were always thinking about it," Archer wrote.

It appeared the person, calling himself Josh Bell under the tag @joshyb90, later deleted his account.

Earlier, a century stand between Mitchell Marsh and Glenn Maxwell and four wickets for spinner Adam Zampa helped Australia down world champions England by 19 runs in the opening clash of the three-match ODI series at Old Trafford on Friday.