Are We Truly Alone? Scientists Have Scanned 10.3 Million Stars, But There's No Sign of Aliens

Using the Murchison Widefield Array telescope in the outback of Western Australia scientists have roughly scanned 10.3 million stars to search extraterrestrial civilizations but found nothing yet. 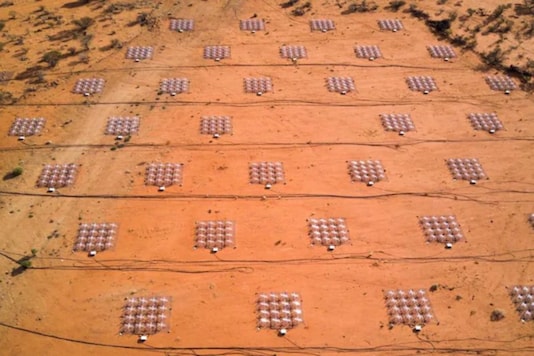 Using the Murchison Widefield Array telescope in the outback of Western Australia scientists have roughly scanned 10.3 million stars to search extraterrestrial civilizations but found nothing yet. Reuters Last Updated: September 11, 2020, 11:02 AM IST FOLLOW US ON:

Scientists have completed the broadest search to date for extraterrestrial civilizations by scanning roughly 10.3 million stars using a radio telescope in Australia, but have found nothing - not yet, at least.

Seeking evidence of possible life beyond our solar system, the researchers are hunting for "technosignatures" such as communications signals that may originate from intelligent alien beings.

Using the Murchison Widefield Array (MWA) telescope in the outback of Western Australia, they searched for low-frequency radio emissions - frequencies similar to FM radio - from stars in the constellation of Vela. The findings were published this week in Publications of the Astronomical Society of Australia.

"It is not surprising that we didn't find something. There are still so many unknown variables," astrophysicist Chenoa Tremblay of the Astronomy and Space Science division of Australia's national science agency, the Commonwealth Scientific and Industrial Research Organisation (CSIRO), said on Wednesday.

"The search for life outside of our solar system is a big challenge," Tremblay added. "We don't know when, how, where or what type of signal we may receive to get an indication that we are not alone in the galaxy."

While the search was 100 times deeper and broader than ever before, according to astrophysicist Steven Tingay of Curtin University in Australia and the International Centre for Radio Astronomy Research, it involved relatively few stars in cosmic terms.

"Ten million stars does seem like a lot. However, our best evaluation is that there are around 100 billion stars (in the Milky Way galaxy). So we have only looked at about 0.001% of our galaxy," Tremblay said. "Pretend the oceans contained only 30 fish and we tried to look for them by testing an area the size of a backyard swimming pool. The chances of finding one of those fish would have been small."

The MWA is a precursor to another instrument, the Square Kilometre Array (SKA), that in the near future promises to boost the search for technosignatures.

"What is important is constantly improving the techniques and always going deeper and further," Tingay said. "There is always that chance that the next observation will be the one that turns up something, even if you expect nothing. Science can be surprising, so the important thing is to keep looking."