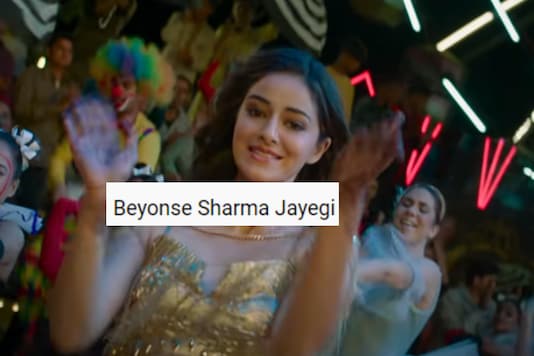 The track 'Beyonce Sharma Jayegi' from the upcoming Bollywood movie 'Khaali Peeli' earlier came under immense criticism for its racist lyrics. News18.com Last Updated: September 14, 2020, 10:14 AM IST FOLLOW US ON:

'Beyonce Sharma Jayegi' has been the top trending topic on social media ever since it was dropped on YouTube about a week ago. The track from the upcoming Bollywood movie Khaali Peeli came under immense criticism for its racist lyrics.

But now the makers have tweaked the title and song description of the heavily panned song from 'Beyonce Sharma Jayegi' to 'Beyonse Sharma Jayegi' and it may have nothing to do with the outrage around it.

In fact, according to a report in Mid-day, Beyonce has trademarked her name to avoid commercial use. The report also stated that the makers are likely to rework on the lyrics of the song to avoid a legal battle.

"In a pre-emptive move, the makers are now planning to rewrite the song to avoid legal repercussions. A final call will be taken this week. With the dance number being called out for racism, it will be an unwise move to take on an international star like Beyoncé, especially at a time when the Black Lives Matter movement has set the stage for equality," a source was quoted saying by the publication.

Also Read: 'Khaali Peeli' Makers May Not Get Away With Their Racist Song, Thanks to Beyonce's Trademarked Name

The song featuring Ananya Pandey and Ishaan Khatter in a dance number was dropped on YouTube on Sunday and those who watched the video faced second-hand embarrassment over its racist lyrics. In fact, a day after its release, outraged netizens posted tweets and comments apologising to the American singer for the song that goes like this: "Oh tujhe dekh ke goriya... Beyonce sharma jayegi," which translates to After looking at you fair woman, Beyonce will feel shy."

The replacement of "c" with "s" in now titled "Beyonse Sharma Jayegi" has faced further ridicule on social media.

As of writing, the track has been downvoted 1 million times since the time of its upload on YouTube. 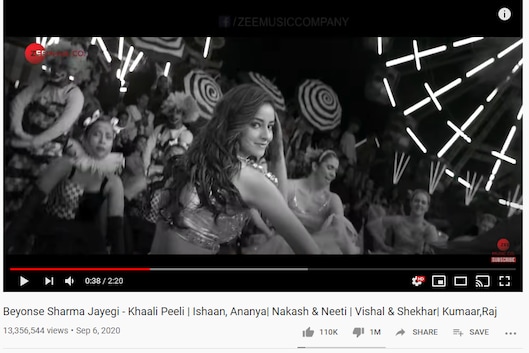 Incidentally, the song comes just a couple of months after the global Black Lives Matter movement, an online campaign in which our own stars participated and shared their anger with #BLM tweets to show solidarity with the George Floyd Protestors in the United States, further pointing out the "hypocrisy" of Bollywood.

Responding to the criticism Khaali Peeli director Maqbool Khan on Thursday said: "First, without any hesitation or excuses we want to apologise to anyone offended. We assure you that the lyric in question was never intended racially. In fact, the term 'goriya' has been so often and traditionally used in Indian songs to address a girl, that it didn't occur to any of us to interpret it in the literal manner," Maqbool said.

Maqbool added by saying: "Also the comparison with Beyonce is simply meant to be a street-smart guy flattering a girl who is trying to impress that her dancing and performance is worth comparing to Beyonce, who we all see as the final word, the epitome of talent, beauty, performance, style and attitude. We are all huge fans, and there was never any question of disrespect."