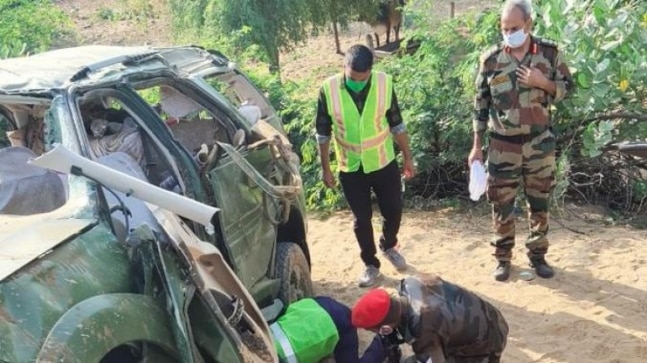 Two Army officers died when their vehicle met with an accident on the Bikaner-Jaipur National Highway in Bikaner, Rajasthan at around 6 am on Saturday.

An Army vehicle met with an accident on Bikaner-Jaipur road at about 6 am today (Photo: ANI)

Two Army officers were killed when the vehicle in which they were travelling overturned on the Bikaner-Jaipur National Highway in Bikaner district of Rajasthan on Saturday.

The accident happened at 6 am today. Two other soldiers injured in the incident are being treated at a hospital, a Defence spokesperson said.

The victims were travelling in an Army vehicle when it overturned on the highway due to a tyre burst, police said.

Arun Kumar, SHO of Seruna Police Station, said that victims were taken to the PBM government hospital where doctors declared both the officers brought dead.